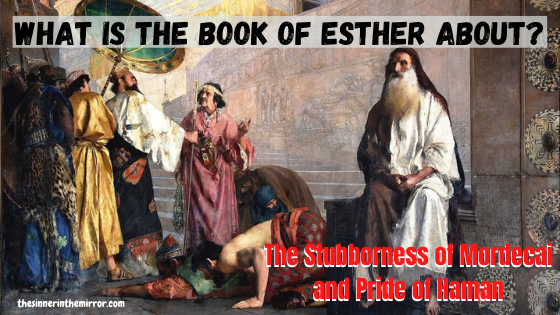 What is the book of Esther about in the bible? The Jews have been in exile in Babylon. The Persians overthrow Babylon. The King of Persia allows some of the Jews to return to Israel but some decide to stay in Persia. Many by this time have been born and raised in Babylon and only know of the land of Israel from stories they’ve heard from their parents and grandparents.

I’m sure they have lives and jobs, businesses, friends and homes. They, like many of us are comfortable where we are and it was a long dangerous journey back to Israel. So, there were a number of Jews that remained in what was Babylon but now the Persian empire.

But life for them is about to get interesting and very dangerous. In to the bible story steps Mordecai and Esther. Mordecai was deported to Babylon by king Nebuchadnezzar as a child and spent his entire life in Babylon. Along the way, he has adopted his orphaned cousin Esther as his own daughter. These two, obscure and unlikely individuals are about to play important roles in Gods plan.

The Rebellion of Queen Vashti

When I read the book of Esther, I find twists in the plot that make me scratch my head and ask: “Why?”. The first is the refusal of Queen Vashti to come to the King at his banquet. Why would she do that? At the time, King Ahasuerus is the most powerful person in the world. Surly she knew there would be consequences to refusing the request of the king.

But yet, she did and the king banishes her from the palace and a search for a new queen begins. Without the refusal of Queen Vashti of Persia to obey king Ahasuerus and come to his banquet, the book of Esther may have never been written. Or, had a very different story and outcome.

When Mordecai insults Haman, by not bowing to him as he passes, there would be no Queen Esther to intercede on behalf of the Jews when Haman convinces the King to order their destruction. A very fortunate turn of events for the Jews, not so much for Haman.

A New Queen and the Bravery of Mordecai

The search for a new queen to replace Vashti begins and beautiful young virgins are gathered from throughout the kingdom of Persia and Esther is also taken. Not only is she taken, but she finds favor with Hegai the king’s eunuch in charge of the women.

He puts her at the front of the line for cosmetic treatments and food and maids. Then King Ahasuerus falls for Esther and she is chosen out of all the young virgins to be queen. Very fortunate, some might even say lucky. Not only was she taken in as part of the search for a new queen, but she finds favor with the eunuch in charge and then wins the heart of the King.

And, to this point, its just a nice story of a young Jewish orphan girl who becomes queen of Persia. But wait, there’s more. Esther’s cousin Mordecai has been coming to the king’s gate to see how Esther is doing. One day her over hears two of the king’s eunuchs plotting to assassinate king Ahasuerus. He tells Queen Esther of the plot and she tells the king that Mordecai has discovered their plot. The would be assassins are hung and it is noted in the records including the service of Mordecai.

The Pride of Haman and the Defiance of Mordecai

Life is good, but the story is about to take a dramatic turn. King Ahasuerus advances Haman to his second in command and decrees that everybody should bow down to him and honor him. But, for some reason, cousin Mordecai won’t bow down for Haman. This, of course, makes Haman angry and he plots to not only deal with Mordecai, but to have the entire Jewish population killed throughout the entire kingdom.

So, here is another big “WHY?”. Why does Mordecai refuse to bow to Haman? Not only was he disrespecting Haman, but he was ignoring an order of the king and we’ve already seen what happens when you do that with queen Vashti. I mean, everyone bows down to Haman, including the Jews. Mordecai’s stubbornness has caused the king to issue a decree to wipe out his entire people.

Now, this is where Esther’s part in the story becomes front and center. As the king’s decree is delivered, Mordecai and Jews throughout the kingdom of Persia are in distress obviously. Esther hears of the decree, but up to this point she has not reveled her ancestry at the direction of cousin Mordecai.

However, now Mordecai asks Esther to plead with the king for mercy for the Jews. Interesting note: Mordecai tells Esther that she shouldn’t think she will escape the king’s decree. And, more importantly, that if she keeps silent, “deliverance for the Jews will arise from another quarter, but you and your family will perish”. A true portrait of faith in God’s provision for his people.

Esther faces a dilemma. No one is to come before the king without being summoned. If they do they will be put to death, unless the king holds out his golden scepter to spare them. She goes before the king, and her “luck” holds again as he holds out his scepter and spares her which allows her to invite the king and Haman to a banquet, and then another.

At Esther’s first banquet, when the king asks her what it is she wants, she invites the king and Haman to come to another banquet the next day and then she will tell the king what she wants. I don’t know what the significance of two banquets is, but overnight the King can’t sleep. Why he can’t sleep we aren’t told, but it has a very fortunate result.

He orders the book of records to be read to him. I guess that would help anybody fall asleep ;). During the reading the account of how Mordecai exposed the assassination plot is read. The King wants to honor Mordecai and Haman ends up having to throw a parade in his honor. So, now he is having to honor the very man that he is wanting to kill along with all the Jews. Not a good day for Haman, but it gets worse.

Esther pleads with the king for Jews and revels that she too is a jew. She exposes Haman’s plot and, as a result, the king has Haman hanged on the very gallows he was building to hang Mordecai on.

And, another fortunate event, Mordecai is given the position of second in command of all Persia. The very job Haman was coveting. But there still remains the matter of the king’s decree against the Jews.

So, What is the Book of Esther about? – Deliverance for the Jews.

A Persian Kings decree can not be reversed, so another decree is sent out allowing the Jews to defend themselves from those who seek to kill them as a result of Haman’s plan. The Jews put their enemies to the sword and are saved. Mordecai is now second in command only to the King of Persia himself and Esther is Queen of Persia.

Haman is dead, and his 10 sons are also executed on the same gallows he had built for Mordecai. And, the Jews still to this day celebrate the feast of Purim to honor Esther’s’ acts of faith and courage. A great story and I encourage you to read it for yourself. Place yourself in the story and in the context. Examine the plot twists, the “lucky” events and ask yourself “Why?”.

Why is it the Book of Esther? It could have easily been the Book of Mordecai. He, after all, is the one who insults Haman.

Why wouldn’t Mordecai follow the Kings order and bow to Haman? Everyone else did, even the other Jews.

Why didn’t Haman just turn in Mordecai and have him put to death? He instead hatches this grand plan to kill all the Jews.

If Mordecai simply bows for Haman, there is no need for the book of Esther and maybe it is never written. If Haman simply has Mordecai put to death, the same can be said. End of story. There is no definitive reason given in the bible for Mordecai’s refusal. There are however, some theories based on biblical and Hebrew traditions but they are just theories.

I guess the obvious answer is: It was God’s plan and he definitely works in mysterious ways. He worked through two obscure Jewish exiles to not only protect his people, but to give them the upper hand on their enemies and place Mordecai and Ester in two of the most powerful positions in the world at that time.

Another important take away is: your decisions, your actions can and will affect others. Even people you don’t know. As the body of Christ, we are all interconnected and our actions reflect on the church and its other members. Mordecai’s act of stubbornness nearly cost the lives of all the Jews in Persia.

Most important though is: God has a plan, we may not know what it is or understand it, but he does and we must trust in him and have faith in his plans and purposes.

And remember it is about his glory not ours. I’m no theologian, just a layman’s layman. I’m sure some of you are much more versed on the theology and I hope you will share your insights with us.

I welcome any comments, questions, ideas or suggestions. Just leave them in the comment section below and I will get back to you soon as I can. You can follow me on Facebook: The Sinner in the Mirror, Twitter: @SinnerMirror, and Instagram: thesinnerinthemirror. May God bless and keep you and give you strength and wisdom to face all that this earthly life may bring.