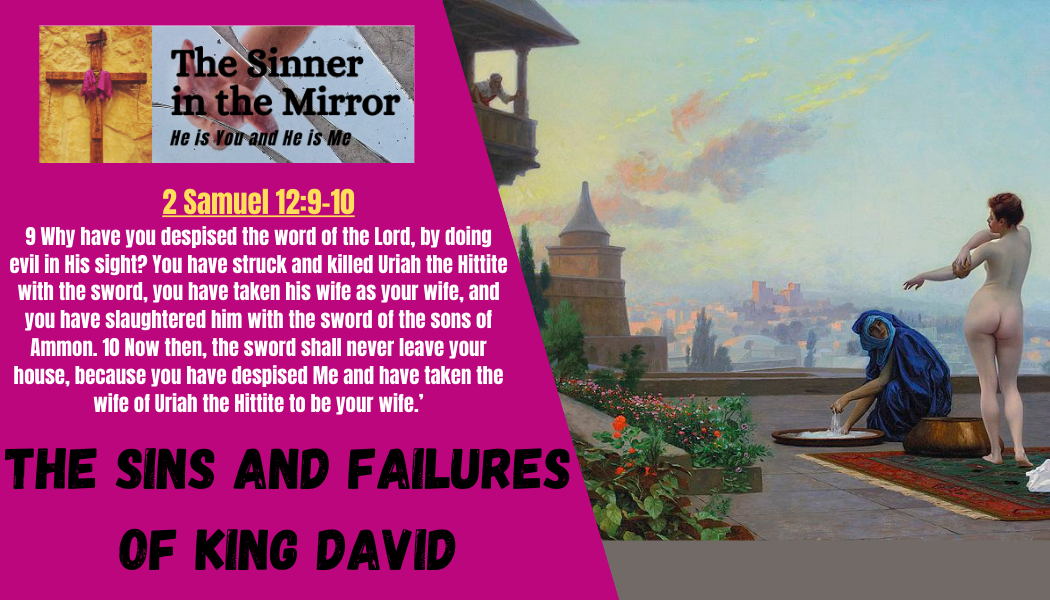 King David of Israel, the greatest of all the kings of Israel, the king of the promise. Jesus himself is the fulfillment of the promise to king David to always have son to sit on the throne of Israel. But, what was it about David? Was he Perfect? Was he sinless? The answer in both cases is an emphatic NO.

So, what was it about king David? Why was he so great? I mean David is called “A Man After God’s Own Heart”. Let’s take a close look at the man David, the greatest king of Israel and the man after God’s own heart.

A Man after GOD’S own Heart

Remember, after the LORD rejected Saul, he sent Samuel to Bethlehem to anoint David as king of Israel. Interesting isn’t it that Jesus, the promised son of David, is born in Bethlehem centuries later.

16 Now the Lord said to Samuel, “How long are you going to mourn for Saul, since I have rejected him from being king over Israel? Fill your horn with oil and go; I will send you to Jesse the Bethlehemite, because I have chosen a king for Myself among his sons.”

Prior to this we have heard nothing of David. He enters the scene, because the LORD has provided him for a king of Israel. Much like Abraham before him, he is chosen by GOD, and not for any of his personal qualities or accomplishments. The bible says that once Samuel anointed David king, the spirit of the LORD came mightily upon him from that day forward.

From there, we read about all of David’ great accomplishments and triumphs. His defeat of Goliath, the giant, champion of the Philistines, was after the spirit of the LORD came upon him. In his confrontation with Goliath we see a glimpse of David’s zeal for the LORD.

45 But David said to the Philistine, “You come to me with a sword, a spear, and a saber, but I come to you in the name of the Lord of armies, the God of the armies of Israel, whom you have defied. 46 This day the Lord will hand you over to me, and I will strike you and remove your head from you. Then I will give the dead bodies of the army of the Philistines this day to the birds of the sky and the wild animals of the earth, so that all the earth may know that there is a God in Israel, 47 and that this entire assembly may know that the Lord does not save by sword or by spear; for the battle is the Lord’s, and He will hand you over to us!”

David in his dealings with Saul, again shows his devotion to the LORD by not taking the opportunity to kill Saul on two different occasions. Now, keep in mind, Samuel has already anointed David king, but Saul still continues to occupy the throne. Yet, David will not strike him down because, in his mind, Saul is still the LORD’s anointed.

6 So he said to his men, “Far be it from me because of the Lord that I would do this thing to my lord, the Lord’s anointed, to reach out with my hand against him, since he is the Lord’s anointed.” 7 And David rebuked his men with these words and did not allow them to rise up against Saul. And Saul got up, left the cave, and went on his way.

9 But David said to Abishai, “Do not kill him, for who can reach out with his hand against the Lord’s anointed and remain innocent?”

So much so, that when the Amalekite came to David with the news of Saul’s death, and thinking he could get favor with king David by telling him that he killed Saul for him, David has him put to death for “were you not afraid to lift your hand to destroy the Lord’s anointed?” To this point, everything about king David is admirable, but as we will see, he is just a man.

A King and a Fallen Man

King David Continues to have success in all that he does. And despite having several years of a divided kingdom to deal with, eventually he presides over a united Israel from Jerusalem.

10 David became greater and greater, for the Lord God of armies was with him.

David has a weakness however, women. Once he gets established in Jerusalem, he takes more wives and concubines. Wives as in more than one. Six wives plus concubines. David gets comfortable in his successes. And, like many of us, once he became comfortable, temptation and sin find their opening.

David sends his army to war with the Ammonites, and instead of going with them like most kings would, he stays in Jerusalem taking it easy. Then, it happened, he sees a beautiful woman bathing from his roof. He asks about her and is told it is Bathsheba, the wife of Uriah the Hittite.

Yet he still sends for her and has an affair with her, knowing she is married, and married to one of his most devoted soldiers who is at this very time out fighting the kings war. Yes, king David, the greatest of all kings of Israel knowingly commits adultery. A man after God’s own heart?

Then when Bathsheba becomes pregnant from their affair, David calls Uriah in from the battle hoping to have him go home to his wife and then he can pass off the pregnancy as being Uriah’s. David, the great king of Israel is concocting a huge lie and deception in order to hide his sin.

Uriah refuses to go to his house while the rest of the army is at war living in tents. So, king David, sends a letter to Joab the leader of his army directing them to put Uriah at the front of the battle in the area of the hardest fighting, and then draw back from him so that he will be killed. The irony, is he sends the letter with Uriah himself when he goes back to the battle.

Now David has committed adultery, tried to concoct a lie to hide his adultery, and now is having Uriah killed. He has one of his most devoted soldiers murdered, so in the end he can take his wife. A man after God’s own heart? Well, he is a man anyway. A fallen sinful man that if not for the provision and protection of the LORD, would be nothing more than a shepherd.

The LORD was not pleased with David because of this and sends the prophet Nathan to confront him.

The consequences of sin are severe, even for David the anointed king of Israel. David for his part, recognized and admitted his sin, and the LORD did not kill him, but the child that he and Bathsheba produced, did die as the LORD said.

The consequences of David’s sin are lasting and far-reaching. From Rape and incest with Amnon and Tamar, to the murder of Amnon by Absalom for the rape of his sister. The plot of his son Absalom to make himself king in David’s place, then the war among the Isrealites over who was to be king David fleeing Jerusalem in shame for fear of his life from his own son.

The death of Absalom, that despite his rebellion, was loved by David. Then an illegitimate census that stirs the anger of the Lord against the Israelites and seventy thousand Israelites die from a pestilence sent by the LORD. King David’s sin, their death. The consequences of our sin don’t affect only us. But, many others can be caught up in our “punishment”.

17 Then David spoke to the Lord when he saw the angel who was striking down the people, and said, “Behold, it is I who have sinned, and it is I who have done wrong; but these sheep, what have they done? Please let Your hand be against me and against my father’s house!”

Then in his old age, David has another son that tries to set himself up as king, even though David has already declared Solomon to be his successor.

A Man of Peace Replaces the Man of War

King David along with the priest Zadok and the prophet Nathan anoint Solomon King. And, David, the man of war gives over his throne to his son Solomon the man of Peace.

2 “I am going the way of all the earth. So be strong, and prove yourself a man. 3 Do your duty to the Lord your God, to walk in His ways, to keep His statutes, His commandments, His ordinances, and His testimonies, according to what is written in the Law of Moses, so that you may succeed in all that you do and wherever you turn, 4 so that the Lord may fulfill His promise which He spoke regarding me, saying, ‘If your sons are careful about their way, to walk before Me in truth with all their heart and all their soul, you shall not be deprived of a man to occupy the throne of Israel.’

But as we shall see, the promise of the LORD that the sword shall never depart from king David’s house, holds true as the sins of the father continue in his son.

So, there you have it. King David, the greatest king of Israel, a man after God’s own heart, is a fallen sinner just like you and just like me. His greatness and all of his accomplishments were because the LORD was with him. God chose him to be king over Israel for his reasons, not because of anything that David had done.

Remember, no matter how righteous someone thinks they are, or you think they are, they are still just sinners like you and me. We are all fallen, we all need a savior and we can accomplish nothing good unless ” the LORD is with us.” If you have any comments, questions, ideas or suggestions, please leave them in the comment section below and I will get back with you asap. Follow me on Facebook: The Sinner in the Mirror, Instagram: sinnerinthemirror, and Twitter: @sinnermirror.

Humbly submitted by the grace, mercy and love of our LORD,