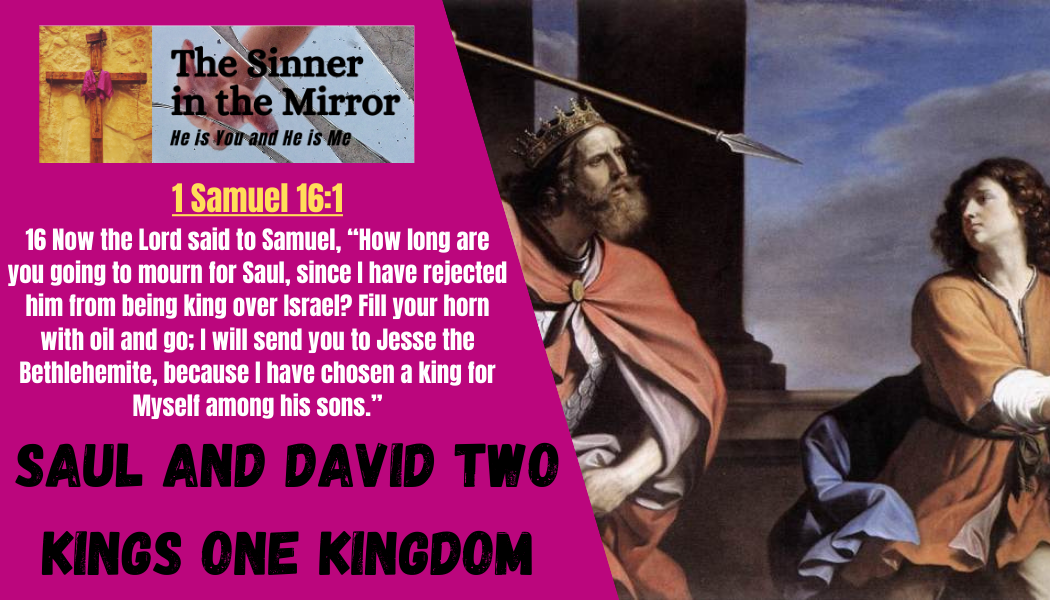 The LORD does work in mysterious ways. We have Saul who Samuel has already told that the LORD is removing the kingdom from him and giving it to another. And, now we have David, who the LORD has had Samuel anoint as king of Israel, becoming servant of Saul. So it begins, the conflict between David and Saul.

16 Now the Lord said to Samuel, “How long are you going to mourn for Saul, since I have rejected him from being king over Israel? Fill your horn with oil and go; I will send you to Jesse the Bethlehemite, because I have chosen a king for Myself among his sons.”

The spirit of the LORD has departed Saul and an evil spirit is now tormenting him. His only relief seems to be when someone plays the Lyre for him. Just so happens, that David is skilled at playing the lyre, what a coincidence. 😉 Saul sends messengers to get David and bring him into the kings service.

We’ve all heard the story of David and Goliath. The Philistines have gathered their army to do battle with Israel, and Saul has mustered the Isrealites. But, out of the camp of the Philistines comes Their champion, A giant, named Goliath. Every day for 40 days (their is that number again) he comes out and challenges Israel to send him a champion out to fight him, loser becomes servant of the other.

The Israelite soldiers are afraid. This guy is a giant after all. Nobody will answer the challenge. Until, David comes to the battle, sent by his father Jessie to check on his three older brothers who are in the army of Israel. David hears the challenge of Goliath and David steps up to take the challenge. His brothers tell him to go home and even Saul tells him that he is just a boy and can’t possibly go to fight with this Giant.

David tells how he fought lions and bears when he was tending his father sheep, and the LORD who saved him from those lions and bears will save him from the hand of this Philistine. Saul tell him to go, even tries to give him his armor but its way to heavy for the boy. So armed with a sling and some smooth stones, this shepherd boy goes out to take on the giant Goliath.

David, for his part, is trusting in the LORD. He even announces to Goliath that he will strike him down “so that all the earth may know that there is a GOD in Israel.” As we have all heard, David strikes Goliath in the forehead with a stone from his sling knocking him to the ground unconscious. Then David uses Goliath’s own sword to cut off his head, The Israelite troops then attack the Philistines who are in shock over the defeat of their champion, and it was a great victory for Israel that day.

After the battle, Saul has David brought before him and ends up over the army for Saul. A very close friendship between Saul’s son, Jonathan and David develops and proves to be very beneficial to David’s very survival. But, here we have Saul who the LORD has revoked his kingship and David, who the LORD has anointed king being together. Now, I’m sure David knows he has been anointed king, but evidently Saul doesn’t know that.

Friction begins to develop between Saul and David. David’s successes in battle have become famous and the people are singing his praises. Saul’s ego gets the best of him and he begins to be jealous of the fame of David.

7 The women sang as they played, and said,

“Saul has slain his thousands,
And David his ten thousands.”

8 Then Saul became very angry, for this lyric displeased him; and he said, “They have given David credit for ten thousands, but to me they have given credit for only thousands! Now what more can he have but the kingdom?” 9 And Saul eyed David with suspicion from that day on.

The very next day, an evil spirit rushes on Saul and he tries to spear David while he’s playing the lyre for him. That would be enough to make one question his security and his anointing as king. David enlists the help of Jonathan to determine Saul’s motives, which almost costs Jonathan his life.

Saul has his eye on David now and places him in charge of the army and sends him out to do battle, hoping the Philistines might take care of David for him. He even gives his daughter to David with the requirement that he bring Saul 100 foreskins of the Philistines. There’s a happy wedding present. Again, this was to get David killed by the Philistines, Except David accomplishes the mission.

25 Saul then said, “This is what you shall say to David: ‘The king does not desire any dowry except a hundred foreskins of the Philistines, to take vengeance on the king’s enemies.’” But Saul plotted to have David fall by the hand of the Philistines. 26 When his servants told David these words, it pleased David to become the king’s son-in-law. So before the time had expired, 27 David set out and went, he and his men, and fatally struck two hundred men among the Philistines. Then David brought their foreskins, and they presented all two hundred of them to the king, so that he might become the king’s son-in-law. And Saul gave him his daughter Michal as a wife.

David continues to have success and gain fame with the people and Saul, seeing him as a rival, looks for ways to kill him. Saul tries to spear David a second time so David flees for his life to the wilderness. Each time Saul hears of David’s whereabouts, he gathers his forces and sets out to capture and kill him.

In his zeal to capture David, he has eighty-five priests killed and then killed everyone in the city of the priests. Men, women, children and livestock. That will win the hearts and minds of the people. Remember, this is a story of GOD’s “chosen” people. Not very faltering if you ask me. If it’s all made up, as some would suggest, they didn’t paint themselves in a very good light.

17 And the king said to the guards who were attending him, “Turn around and put the priests of the Lord to death, because their hand also is with David and because they knew that he was fleeing and did not inform me.” But the servants of the king were unwilling to reach out with their hands to attack the priests of the Lord. 18 Then the king said to Doeg, “You, turn around and attack the priests!” And Doeg the Edomite turned around and attacked the priests, and he killed on that day eighty-five men who wore the linen ephod. 19 He also struck Nob the city of the priests with the edge of the sword, both men and women, children and infants; he also struck oxen, donkeys, and sheep with the edge of the sword.

On two different occasions, Saul is closing in on David, and David has a chance to kill Saul and put an end to the chase. Once in a cave, in the wilderness, David and some of his men are hiding in the cave when Saul comes into relieve himself. David sneaks up on him and cuts off a piece of his cloak, but does not harm Saul. After leaving the cave, David calls out to Saul and shows him, that he could have killed him, but did not. Saul blessed David for his mercy and they go their separate ways. Done right? Not so Fast!

9 And David said to Saul, “Why do you listen to the words of men who say, ‘Behold, David is seeking to harm you’? 10 Behold, this day your eyes have seen that the Lord had handed you over to me today in the cave, and someone said to kill you, but I spared you; and I said, ‘I will not reach out with my hand against my lord, because he is the Lord’s anointed.’ 11 So, my father, look! Indeed, look at the edge of your robe in my hand! For by the fact that I cut off the edge of your robe but did not kill you, know and understand that there is no evil or rebellion in my hands, and I have not sinned against you, though you are lying in wait for my life, to take it.

Later The Ziphites go to Saul and tell him they know where David is hiding, and again, Saul gathers troops and goes out after David. While Saul and his troops are asleep, David sneaks into camp and takes Sauls spear and his water jar. Once they are safe across the valley, they call out to Sauls camp and again David demonstrates that he could have killed Saul but didn’t. Another blessing and apology from Saul, and its finally over right? NOPE!

22 David replied, “Behold, the spear of the king! Now have one of the young men come over and take it. 23 And the Lord will repay each man for his righteousness and his faithfulness; for the Lord handed you over to me today, but I refused to reach out with my hand against the Lord’s anointed. 24 Therefore behold, just as your life was highly valued in my sight this day, so may my life be highly valued in the sight of the Lord, and may He rescue me from all distress.”

Defection of David and the Death of Saul

David is not convinced and fears for his life. Out of desperation, he defects to the Philistines. When Saul hears of Davids defection, he no longer pursues him. David deceives King Achish of the Philistines by making raids on Canaanite villages and telling the Philistines they were Israelite villages. He kills everyone in the villages so there are no witnesses to expose his deception. Remember, the LORD had directed the Israelites when they went into Canaan to eliminate everyone there.

Then, the Philistines go to war with Israel and king Achish tells David he expects him to go with him to fight the Israelites and David agrees. The leaders of the Philistine army don’t trust him and demand that he stay out of it. Saul sees the Philistine army and is scared. He tries to inquire of the LORD, but the LORD will not answer him. Desperate, Saul disguises himself and seeks out a medium. They are specifically prohibited by the LORD’s commandments, by the way.

Saul asks the medium to call up Samuel from the dead. She does, and Samuel appears and tells Saul that LORD will give him, his sons and the Israelite army into the hands of the philistines the next day. “Because you did not obey the voice of the LORD.” The words of Samuel come true as during the battle, Saul and his sons are killed and the army of Israel flees from the Philistines.

Harsh story of lies, deceit, betrayal and death. Thousands of soldiers die on the battlefield, in addition to Saul, because Saul didn’t obey the commands of the LORD. Again, out sin can affect the lives of others around us. It often is not, just between you and GOD, but has a ripple effect throughout time.

May God Bless and Keep You Always