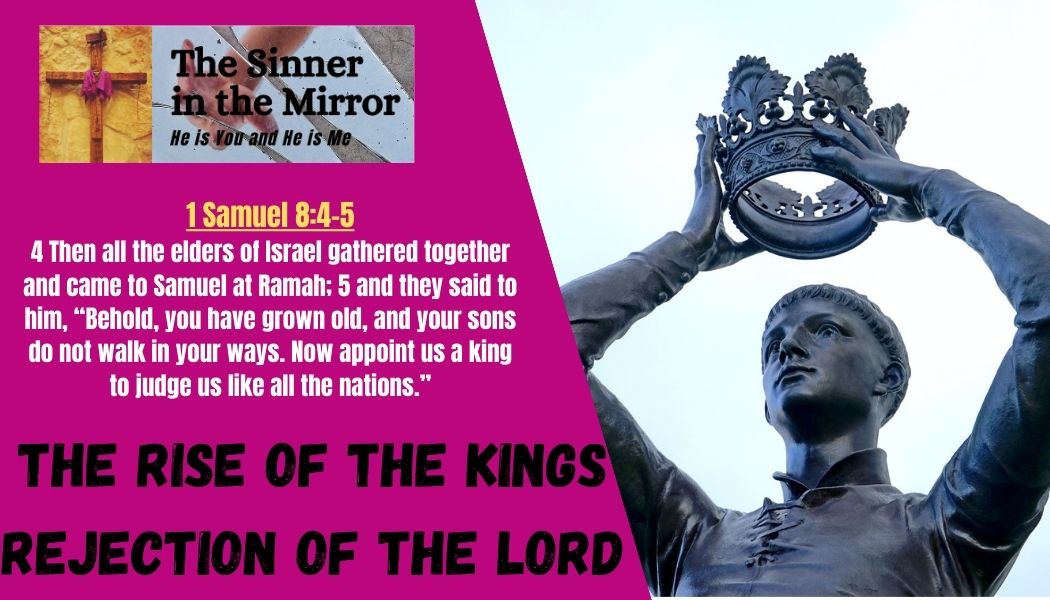 Samuel, the trustworthy prophet of the LORD, has grown old and placed his son’s as judges over Israel. Problem is, his sons did not follow in his footsteps, but turn to bribery and ilicit gains for themselves. The elders of Israel meet and confront Samuel with the request that he appoint a king over them “like other nations”. This was predicted way back in Deuteronomy.

14 “When you enter the land which the Lord your God is giving you, and you take possession of it and live in it, and you say, ‘I will appoint a king over me like all the nations who are around me,’ 15 you shall in fact appoint a king over you whom the Lord your God chooses. One from among your countrymen you shall appoint as king over yourselves; you may not put a foreigner over yourselves, anyone who is not your countryman.

The Rejection of the LORD as king

Samuel is not pleased with this request, but prays to the LORD. The LORD tells Samuel to Listen to the people. And, set a king over them.

7 And the Lord said to Samuel, “Listen to the voice of the people regarding all that they say to you, because they have not rejected you, but they have rejected Me from being King over them. 8 Like all the deeds which they have done since the day that I brought them up from Egypt even to this day—in that they have abandoned Me and served other gods—so they are doing to you as well. 9Now then, listen to their voice; however, you shall warn them strongly and tell them of the practice of the king who will reign over them.”

Then Samuel relays the LORD’s warning about having a king. How he will take their sons for his military, their daughters for cooks. He will take one tenth of their produce and livestock. And, the most stern warning of all:

18 Then you will cry out on that day because of your king whom you have chosen for yourselves, but the Lord will not answer you on that day.”

But they are determined to have a king like the “other nations”. Nothing much has changed over the centuries, whether it’s a king, president, pastor or pope, we seem to always want someone to “take care of us” and ignore the one who truly takes care of the universe.

The Annointing of Saul as king

The LORD sends a handsome young man from the tribe of Benjamin to Samuel and tells him “Here is the man of whom I speke to you. He it is who shall rule over my people.” Samuel takes a vial of oil and pours it on Saul’s head annointing him king of Israel and declaing to him, “The Lord has annointed you ruleer over his pople Israel and you will save tham from the hand of their enemies.

Samuel calls the tribes together to introduce their new king. But,they can’t find Saul. He’s hidden himself and they have to find him first. Not a very good start. Samuel finally declares him king before the people, but a few weren’t convinced and despised him.

The Ammonites attack Jabesh-gilead. The spirit of GOD comes over Saul and he musters three hundred seventy thousand troops and they defeat the Ammonites. After the battle, all the people gather in Gilead to make Saul king before the LORD. Samuel then admonishes the people about their sin of demanding a king for themselves when GOD was their king.

20 Samuel said to the people, “Do not fear. You have committed all this evil, yet do not turn aside from following the Lord, but serve the Lord with all your heart. 21 Indeed, you must not turn aside, for then you would go after useless things which cannot benefit or save, because they are useless.

25 But if you still do evil, both you and your king will be swept away.”

The Disobedience of Saul

Sauls reign is short, he puts his personal ambitions ahead of the commads of the LORD. He goes to battle with the Philistines, and after defeating their garrison a Geba, the Philistines  gather to  attack Israel. The Isrealites are afraid and start to hide and Saul fears they are slipping away from him. So, rather than wait for Samuel to arrive to offer sacrifices, he decides to go ahead without him. Samuel announces the LORDs punishment for his disobediace.

13 But Samuel said to Saul, “You have acted foolishly! You have not kept the commandment of the Lord your God, which He commanded you, for the Lord would now have established your kingdom over Israel forever. 14 But now your kingdom shall not endure. The Lord has sought for Himself a man after His own heart, and the Lord has appointed him ruler over His people, because you have not kept what the Lord commanded you.”

Of course, Saul’s disobedience doesn’t end there. The LORD sends word through Samuel that Saul and the Isrealites are to attack and utterly destroy the Amalekites. This is the LORDs judgement on the Amalekites for they and the Midianites have been a problem for Isreal since they came out of Eygypt. Now, we have to set aside our human standards of judgement here. God is commanding that the Isrealites kill them all. Man, woman, child and livestock. Nothing is to be left alive of the Amalekites.

Seems rather harsh, by our standards, but remember, we are all under such judgement. We all deserve the same punishment. We are all sinners and have fallen. God has provided for our redemption, but only by his grace and mercy and for his glory.

Saul, decides on his own to spare the king of the Amalekites and the best of the livestock and all that was valuable. The word of the LORD comes to Samuel: ” I regret that I made Saul king, for he has turned his back from following me.” Samuel goes and confronts Saul, yet again:

17 So Samuel said, “Is it not true, though you were insignificant in your own eyes, that you became the head of the tribes of Israel? For the Lord anointed you as king over Israel. 18 And the Lord sent you on a mission, and said, ‘Go and completely destroy the sinners, the Amalekites, and fight against them until they are eliminated.’ 19 Why then did you not obey the voice of the Lord? Instead, you loudly rushed upon the spoils and did what was evil in the sight of the Lord!”

Samuel kills the king of the Amalekites himself then returns to his home never to see Saul again for the rest of his life. “And the LORD was sorry that he made Saul king over Israel.” Interesting, God has regrets.

The Annointing of David King

The LORD sends Samuel to Jessie the Bethlemite. ” for I have provided for myself a king among his sons.” Samuel goes to Bethlhem and has a sacrifice to the LORD invitnng jessie and his sons. They go through all of his sons, but the LORD has chosen the youngest, David who is with the sheep.

They bring him to Samuel, the LORD tells him this is the one, so Samuel annoints him and the spirit of the LORD came upon David. The Spirit of the LORD had left Saul only to be replaced by an evil spirit that torments him. When someone plays the lypre for him, he get some relief from the evil spirti. What a coincidence 😉 David just happens to be skilled at playing the lyre and Saul sends for him to enter his service.

23 So it came about whenever the evil spirit from God came to Saul, David would take the harp and play it with his hand; and Saul would feel relieved and become well, and the evil spirit would leave him.

One Kingdom but two Kings

So, now the story gets really interesting, so stay tuned. One kingdom of Israel with two kings, at least in the mind of Saul, he is still king even though Samuel has informed him that God has rejected him from being king. The man Saul refused to relinquish his power and position. David, the young man annointed by the LORD to be his king of HIS people, continues to honor Saul as king.

Next time we will examine the turmoil between David and Saul as we continue through the time of the kings. If you have any comments, questions, ideas or suggestions please leave them in the comment section below and I will get back to you asap. Follow me on Facebook: The Sinner in the Mirror, Twitter: @sinnermirror, and Instagram: thesinnerinthemirror. May God bless and keep you always.

Humbly submitted by the grace and mercy of our LORD.

The Sinner in the MIrror