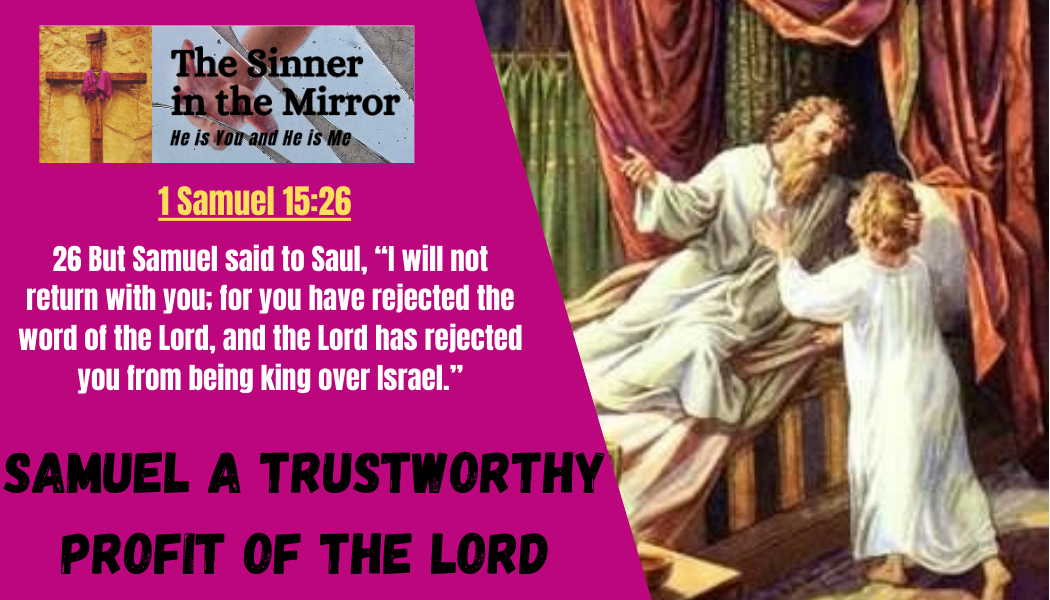 The beginning of the story of Samuel is a familiar one. A man Elkanah has two wives. One has children, Peninnah, and the other, Hannah, does not. Elkanah loves Hannah, but Peninnah liked to rub it in that she could have children but Hannah could not.

So, once again, we have a barren wife that will produce a child that the LORD will use His purposes. Remember Sarah and Abraham, for instance. Hannah was understandably upset that she hadn’t produced any children and Peninnah, her husbands other wife had, and not only that but was rubbing it in her face.

The Prayers and Vow of Hannah

Hannah prayed to the LORD and vowed that if he would give her a male child, that he would be a nazarite dedicated to the LORD all his life. The high priest at the time, Eli, sees her praying and thinks she is drunk since he only sees her lips moving. She explains to Eli that she is deeply troubled and not drunk by any means.

12 Now it came about, as she continued praying before the Lord, that Eli was watching her mouth. 13 As for Hannah, she was speaking in her heart, only her lips were quivering, but her voice was not heard. So Eli thought that she was drunk. 14 Then Eli said to her, “How long will you behave like a drunk? Get rid of your wine!” 15 But Hannah answered and said, “No, my lord, I am a woman despairing in spirit; I have drunk neither wine nor strong drink, but I have poured out my soul before the Lord.

Eli blesses her, ” Go in Peace; the God of Israel grant the petition you have made to him”The LORD answers Hannahs prayer and she conceives and bears a son, Samuel.

The Birth of Samuel

After weaning Samuel, Hannah fulfills her vow to the LORD and presents the child to Eli the priest. Even as a child, Samuel ministers before the LORD. Each year when they went to offer the yearly sacrifice Elkanah and Hannah would visit their son. The priest Eli blesses Hannah again.

20 Then Eli would bless Elkanah and his wife, and say, “May the Lord give you children from this woman in place of the one she requested of the Lord.” And they went to their own home.

And, the LORD gives Hannah three sons and two daughters. So, doing things the LORD’s way, has its rewards. Maybe not in this earthly existence, but rewards will come nonetheless.

The Failings of Eli

The Priest Eli has two sons, and as it was the tradition, they were priests as well. But, they didn’t take their duties seriously. They took the best meat from peoples sacrifices without regard for the commandments for the sacrifice.

17 And so the sin of the young men was very great before the Lord, for the men treated the offering of the Lord disrespectfully.

Eli hears of all that his sons are doing and he pleads with them to stop.

A man of God comes to Eli and confronts him with “Thus the LORD has said:” The pronouncement from the LORD is that the house of Eli shall all die by the sword, both of his sons will die on the same day. The LORD declares that the priesthood will be taken away and that none in his family “shall ever live to old age”.

Now, the bible says that the word of the LORD was rare in those days. But, one night while Eli is sleeping, the LORD calls Samuel. The boy thinks Eli is calling him and he goes to him, but Eli says “I didn’t call you”. The LORD calls Samuel three times and finally Eli realizes it is the LORD.

Samuel had not experienced the word of the LORD as yet. Then the LORD came and stood there and called Samuel, when Samuel responds, the LORD proceeds to tell him of all that he is about to do to Eli’s house and why.

11 Then the Lord said to Samuel, “Behold, I am going to do a thing in Israel, and both ears of everyone who hears about it will ring. 12 On that day I will carry out against Eli everything that I have spoken in regard to his house, from beginning to end. 13 For I have told him that I am going to judge his house forever for the wrongdoing that he knew, because his sons were bringing a curse on themselves and he did not rebuke them. 14 Therefore I have sworn to the house of Eli that the wrongdoing of Eli’s house shall never be atoned for by sacrifice or offering.”

Eli asks Samuel what the LORD said to him? Samuel is afraid to tell him, but Eli insists. So, Samuel tells him everything, and Eli said, “It is the LORD; let him do what seems good to him.”

Judgment on the House of Eli

About this time, the Philistines make war on Israel. They defeat Israel and 4000 Israeli soldiers are killed. Then the sons of Eli, Hophni and Phinehas bring the ark of GOD out to the battle field. The Philistines become afraid of the “gods” who struck Egypt.

The Philistines fight and slaughter thirty thousand more soldiers of Israel. They also capture the ark of GOD and kill the sons of Eli, Hophni and Phinehas. A runner makes his way back to Eli and informs him that his sons are dead and that the ark of God is now in the hands of the Philistines.

17 Then the one who brought the news replied, “Israel has fled before the Philistines and there has also been a great defeat among the people, and your two sons, Hophni and Phinehas are also dead; and the ark of God has been taken.” 18 When he mentioned the ark of God, Eli fell off the seat backward beside the gate, and his neck was broken and he died, for he was old and heavy. And so he judged Israel for forty years.

So the judgment of the LORD that he told to Samuel is carried out that day on Eli and his house. Because his sons had contempt for the commandments of the LORD. Makes one wonder, am I raising children to respect GOD and his commandments? If I don’t, what consequences will there be, not only for them, but all of my family and others around them as well?

Thirty four thousand Israelite solders died in the battle that led to the deaths of Eli’s sons. What did they have to do with it? I don’t know, but our sin affects not only us, but others who may have nothing to do with our sins. Sin has far-reaching consequences. Eternal consequences.

If you have any questions, comments, suggestions or ideas, please leave them in the comment section below and I will get back to you asap. You can follow me on Facebook: sinner in the mirror, Twitter: @sinnermirror, and Instagram: thesinnerinthemirror. May God bless and keep you always.