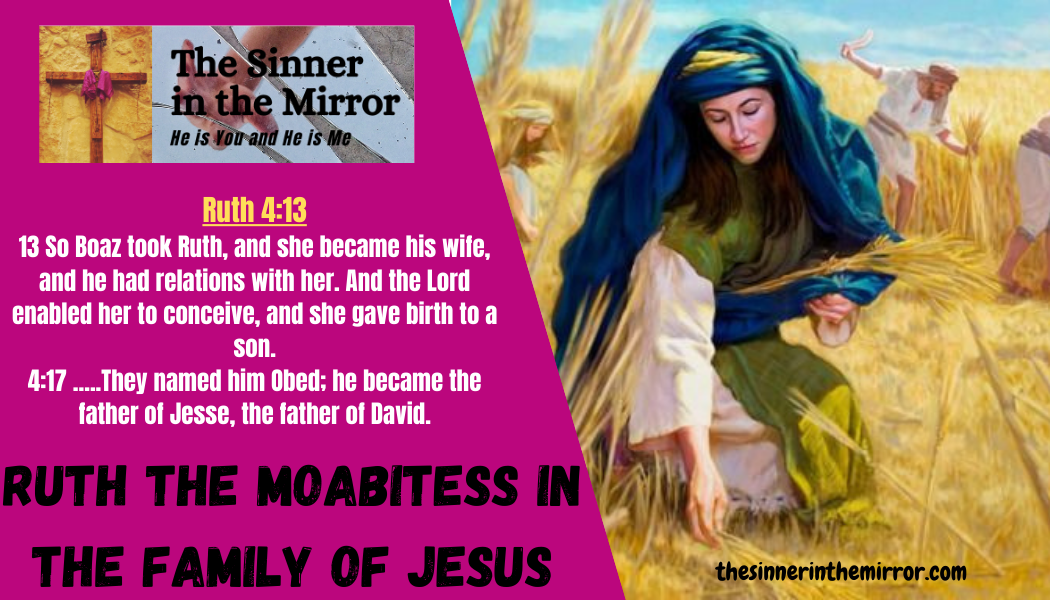 As you make your way through the Bible Story, you come across some interesting back stories if you will. Like the story of Ruth. She has her own book in the Bible and she ends up being the Great Grandmother of King David of Israel. But, that’s not the interesting part.

Ruth isn’t Jewish, worse she’s a dreaded Moabite. Moab was a frequent enemy of Israel and one who oppressed the Israelites for eighteen years. So how does this Gentile, this Moabitess, end up in the family tree of king David, and thus in the genealogy of Jesus Christ himself?

There was a Famine in the Land

It begins with a certain man, Elimelech, of Bethlehem in Judah. Hmmmm, interesting connection. Jesus is born in Bethlehem centuries later. There is famine in and he takes his wife Naomi and his two sons Mahlon and Chilion and they move to Moab to escape the famine. Elimelech dies there leaving Naomi and the two boys.

Mahlon and Chilion both take Moabite wives and after they have been in Moab about the years, they both die as well. Now Naomi is without her husband and her sons. A woman without a husband or sons to care for her at this time in history, is facing a very uphill struggle.

Naomi Loses Her Husband and Sons

Now widowed and childless, Naomi starts to return to Judah, in Israel. Where, maybe she can get some help from her relatives. Her two daughter in laws are going with her but she tells them to go back to their people.

10 However, they said to her, “No, but we will return with you to your people.” 11 But Naomi said, “Return, my daughters. Why should you go with me? Do I still have sons in my womb, that they may be your husbands? 12 Return, my daughters! Go, for I am too old to have a husband. If I said I have hope, if I were even to have a husband tonight and also give birth to sons, 13 would you therefore wait until they were grown? Would you therefore refrain from marrying? No, my daughters; for it is much more bitter for me than for you, because the hand of the Lord has come out against me.”

One eventually does go, but not Ruth. She refuses to leave Naomi, her mother-in-law. She is determined to go with her to Judah.

16 But Ruth said, “Do not plead with me to leave you or to turn back from following you; for where you go, I will go, and where you sleep, I will sleep. Your people shall be my people, and your God, my God. 17 Where you die, I will die, and there I will be buried. May the Lord do so to me, and worse, if anything but death separates me from you.”

Ruth – Where You Go I will Go

Naomi sees that Ruth is determined to go with here and the two of them continue on to Bethlehem in Judah. It causes quite a stir when they show up. Naomi and this Moabitess. The Israelites weren’t supposed to intermarry with the other peoples if you remember. Yet here we are with one that will be the great-grandmother of the great king David of Israel.

They have returned right at harvest time and Ruth goes out to glean in the fields behind the harvesters. As fate would have it, actually as GOD would have it, Ruth ends up gleaning in the field of one of Naomi’s husband, Elimilech, next of kin. And, in Israel, the law was that if a man dies leaving no children, the next of kin was to marry her and produce children for the deceased. This was to preserve their inheritance.

24 saying, “Teacher, Moses said, ‘If a man dies having no children, his brother as next of kin shall marry his wife, and raise up children for his brother.’

Now, if you know the story, you know that Boaz takes notice of Ruth. Evidently she’s quite a looker. He is told that she is the Moabite that Naomi brought back with her. Boaz tells Ruth to glean only in his fields and stay close to his women servants. He even makes sure that the harvesters leave extra for her to glean.

When Ruth tells Naomi what happened, she realizes that it is one of her nearest kinsmen and has Ruth get all dressed up looking nice. And, when Boaz is finished eating and drinking and lies down to sleep, Ruth goes and lies at his feet. Boaz wakes up to find Ruth asleep at his feet where Ruth asks him to perform the right of next of kin.

Boaz agrees except there is another relative more closely related that he has to confer with. The make an agreement and Boaz acquires Ruth and all that Naomi’s husband Elimilech owned in Israel.

9 Then Boaz said to the elders and all the people, “You are witnesses today that I have bought from the hand of Naomi all that belonged to Elimelech and all that belonged to Chilion and Mahlon. 10 Furthermore, I have acquired Ruth the Moabitess, the widow of Mahlon, to be my wife in order to raise up the name of the deceased on his inheritance, so that the name of the deceased will not be eliminated from his brothers or from the court of his birth place; you are witnesses today.”

The Great Grandparents of King David

So, there you have it. The kingly line of David includes a gentile, a Moabitess, from one of the nations that oppressed Israel. The story of Israel shows that GOD can and will use anybody for his purpose and that being born a Jew is not necessarily the only qualification for being chosen by GOD.