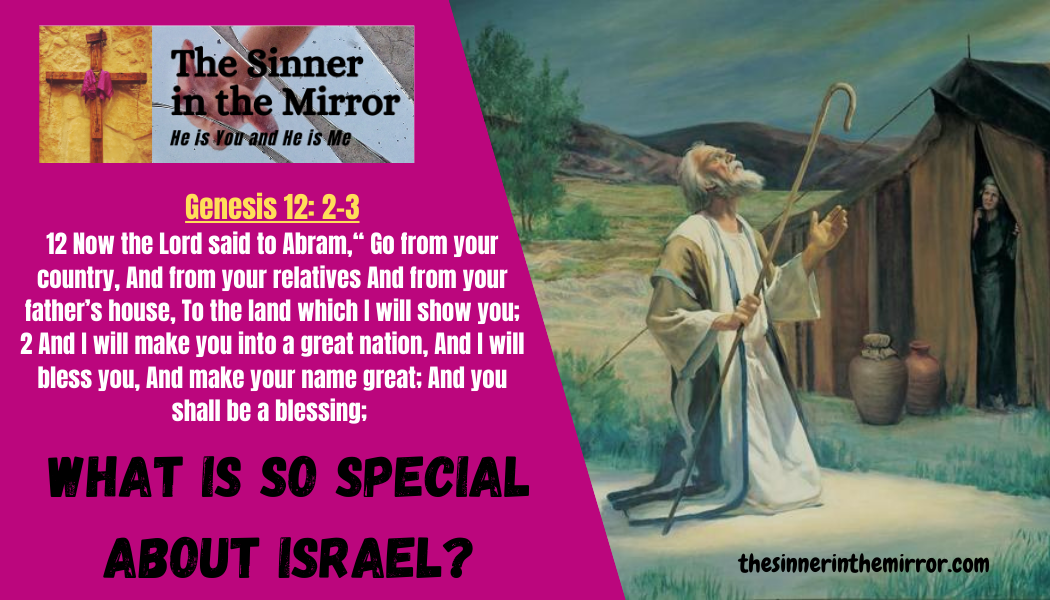 Before I got into seriously studying the Bible, I often wondered, “why did GOD choose Israel to be his chosen people?” What made them special? Were they better, stronger, more righteous than the other peoples? All the peoples in the world were descended from Noah and his family after the flood. All essentially cousins. 😉 Why Israel?

After reading and studying the whole Bible, it became very apparent that the answer was: NOTHING! Except, of course, GOD Chose them period end of sentence. GOD decided to choose a people for his reasons and his Glory and he came to a pagan man living in the Chaldeans, what is modern day Iraq, and made a covenant with him.

After the flood, Noah, his sons, and their wives multiply and over time, repopulate the earth. Told to spread out and fill the earth, they ignore GOD’s instructions and gather at Babel. If you remember the story, GOD confuses their language and, unable to communicate with each other, forces them to spread out.

Then we are introduced to Abram ( later renamed, by GOD, Abraham). No particular reason given, nothing special about him to this point. In fact, he’s a pagan living in what is now Iraq. Now, remember, everyone on the planet at this point is a descendant of Noah and his family. The eight people that GOD spared from the flood. The only survivors of man kind.

12 Now the Lord said to Abram,“ Go from your country, And from your relatives And from your father’s house, To the land which I will show you; 2 And I will make you into a great nation, And I will bless you, And make your name great; And you shall be a blessing; 3 And I will bless those who bless you, And the one who curses you I will curse. And in you all the families of the earth will be blessed.” 4So Abram went away as the Lord had spoken to him; and Lot went with him. Now Abram was seventy-five years old when he departed from Haran.

It says, “Abram went”, at this time the LORD was just one of many “gods” to Abram. Being a pagan he worshiped many gods, but he obeyed the LORD. His story from here was one of success, failure, dishonesty and even a lack of faith. But, we come to the often mentioned verse:

4 Then behold, the word of the Lord came to him, saying, “This man will not be your heir; but one who will come from your own body shall be your heir.” 5 And He took him outside and said, “Now look toward the heavens and count the stars, if you are able to count them.” And He said to him, “So shall your descendants be.” 6 Then he believed in the Lord; and He credited it to him as righteousness.

“He believed the LORD”, that simple, no other explanation for his choosing, GOD picked him for his own reasons. And the LORD fulfills his promises to Abram. The people of Israel are the fulfillment of God’s promise to Abram to give him many descendants. I’m sure GOD has more important reasons for choosing Israel, but from a practical point of view, that’s it. A promised people descended from Abraham.

5 And you shall respond and say before the Lord your God, ‘My father was a wandering Aramean, and he went down to Egypt and resided there, few in number; but there he became a great, mighty, and populous nation.

There is absolutely nothing else special about the people of Israel when compared to the rest of the nations. They have all the same failings, flaws, and moral weaknesses. As we shall see over and over again through the Bible Story.

The Flaws of the Chosen

Abraham himself has his bouts with lies, fearfulness and lack of faith. Jacob follows along the same path. The son’s of Jacob plot to kill their brother Joseph and then sell him into slavery. Moses is a murderer and a stutterer. Aaron the priest makes a pagan idol for the Israelites to worship while Moses is getting the Commandments. For 40 years of wandering in the wilderness, Israel “tests” GOD ten different times.

The nation of Israel, GOD’s chosen people, has everything from murderers, liars, cheaters, adulterers, idolaters, homosexuality, and child sacrifices. Not a very positive picture. Some like to make the assertion that the Bible is just myth. Just made up by the Jews to glorify themselves. Really? If you are going to make up a story about you people, why in the world would you include all the terrible deeds?

Disobedience of the Chosen

Even after they take possession of the promised land, and after God has delivered all of their enemies into their hands and given them peace and rest, they disobey. Told to drive out the inhabitants of the land of Canaan, they don’t quite get it done. Told not to intermarry with them, they do. Do not worship their gods, but they do anyway.

Micah from the tribe of Epraham, makes his own idol and religion. Even hiring a Levite to be his priest. Men from the tribe of Benjamin turn to homosexuality, rape and murder. The Israelites end up in a civil war with Benjamin and the tribe is nearly wiped out.

13 Now the sons of Israel again did evil in the sight of the Lord, and the Lord handed them over to the Philistines for forty years.

It continues throughout the story, even king David, the greatest king in the history of Israel, was an adulterer and a murderer. So, as you can see, there is nothing special about Israel. Nothing that they have done to deserve to be GOD’s chosen people. They are sinners just like everybody else. They are chosen by GOD by his grace, love and mercy, not by any works of their own.

The Patience and Faithfulness of GOD

God is forever patient and merciful. Time after time the people of Israel forget their GOD. They ignore his commandments, they chase after the pagan gods of the surrounding peoples. And, yet GOD though he handed them over to their enemies, would hear their cries and restore them.

Ever faithful to his covenant promises to Abraham, Isaac and Jacob, despite their (our) continued disobedience. As soon as things get good, Israel would forget GOD. They would “do what was right in their own eyes”. Fortunately for them, and us, GOD’s grace, love and mercy are limitless. So much so that he sent his only SON to die for us.

So, the answer as to what is special about Israel is, “nothing”. Nothing about the nation of Israel is any more special than any of the other nations except, GOD chose them. GOD made a covenant with their ancestors, and GOD keeps his word. Israel was chosen to bring glory to GOD, not to Israel. It is, and always has been about GOD and his Glory. We would be wise to remember that ourselves.