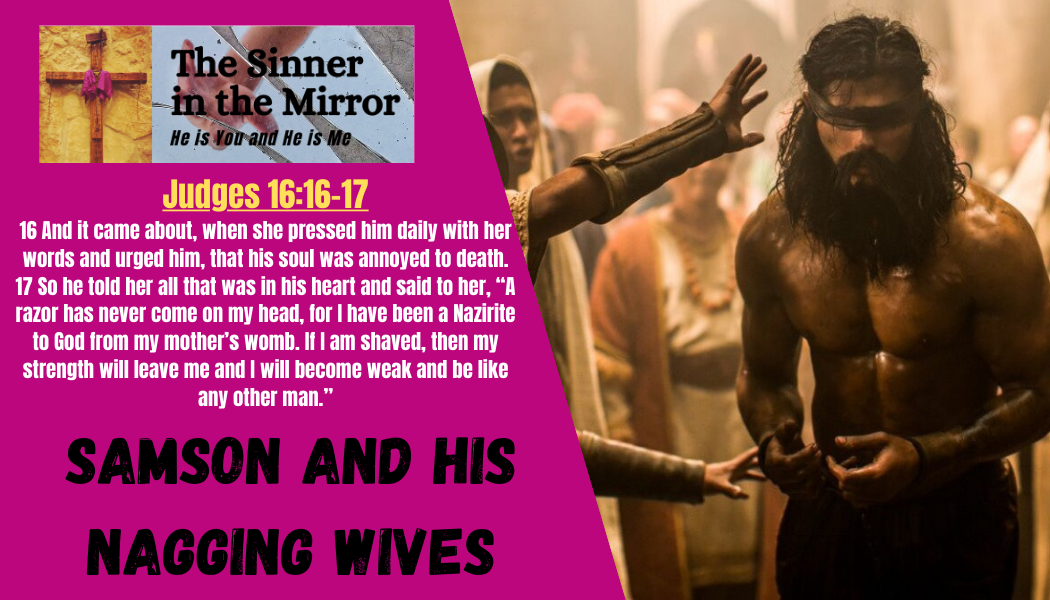 Samson and Delilah, you’ve probably heard the story. Samson comes to be a judge in Israel at a time that should be starting to sound familiar by now, “The Israelites again did what was evil in the sight of the LORD”. Over and over again, they just don’t seem to learn. This time the LORD gives them to the Philistines for forty years. Obedience brings blessing, but disobedience brings curse. God, in his infinite mercy, provides for another deliverer, with a familiar story line.

2 And there was a man of Zorah, of the family of the Danites, whose name was Manoah; and his wife was infertile and had not given birth to any children. 3 Then the angel of the Lord appeared to the woman and said to her, “Behold now, you are infertile and have not given birth; but you will conceive and give birth to a son. 4 And now, be careful not to drink wine or strong drink, nor eat any unclean thing. 5 For behold, you will conceive and give birth to a son, and no razor shall come upon his head, for the boy shall be a Nazirite to God from the womb; and he will begin to save Israel from the hands of the Philistines.”

The Angel of the LORD

It’s the “Angel of the LORD” again. Is it another preincarnate appearance of Christ? I don’t know, but when Manoah asks his name he says, “Why do you ask my name? It is too wonderful”. (Judges 13:18). And, when Manaoah and his wife realize who was just with them Manoah says, “We shall surely die, for we have seen GOD”. ( Judges 13:22)

The woman bore a son and named him Samson. Interesting that no name is given for the woman. We know Manoah, her husband, and Samson her son, but she remains nameless. Samson grows and “the spirit of the LORD began to stir in him.” But then he sees a Philistine woman.

Wait, I thought Samson was supposed to deliver Israel from the Philistines, now he’s wanting to marry one? Hasn’t God warned the Israelites not to intermarry with the other nations? Ah, but God has his own ways of handling things and they are seldom how we would do it. His story, His plan, His Glory.

Samson and his parents go to get this Philistine woman for his wife. A Lion enters the story and attacks him on the way. Samson kills it with his bare hands. A swarm of bees makes a hive in the body cavity of the Lion and on his return trip to his future wife, Samson sees the bees and eats some honey. I don’t know what this would have to do with the story except Samson makes a wager with his fiancees’ relatives for some fancy clothes if they can solve his riddle.

The Philistines can’t figure it out, so they tell his new wife that she needs to get the answer for them or they will burn her and her father’s house. Nice folks ;( When she asks Samson he doesn’t want to tell her, but she nagged him, and on the seventh day he told her. She tells the Philistines of the town and they tell Samson the riddle.

Samson is a wee bit upset. The spirit of the LORD rushes on him and he goes to a neighboring Philistine town and kills 30 men, takes their garments and gives them to the people that solved his riddle. He storms off to his parents house leaving his new wife, so her father gives her to the man who had been Samson’s best man. Quite a soap Opera.

When Samson cools off he goes to get his wife but finds out she’s been given to another. Samson, out of anger, catches 300 foxes and ties torches to their tails and turns them loose in the fields of the Philistines, and it burns up all of their crops. The Philistines, in retaliation, go and burn Samson’s wife and her father. Then Samson strikes them down with a great slaughter. So, it begins, Samson versus the Philistines.

At one point, he kills a thousand Philistines with the jawbone of a donkey. Afterwards, Samson is thirsty, killing a thousand Philistines can do that to you, and he calls on the LORD. GOD opens the ground and water comes out so he can drink. We’ve seen this before. Can you remember where? It looks like everything is going according to plan, Samson is killing the Philistines, but then……. Samson falls in love with another Philistine woman Delilah.

She Nagged Him Day after Day

Delilah is not exactly your model wife. The lords of the Philistines offer her eleven hundred pieces of silver if she will get her husband Samson to tell her what makes his strength so great and how he can be bound. OK, so she asks him, “how could you be bound so someone could subdue you?.” Now, why he doesn’t get suspicious, I don’t know. Not a normal question for a wife to ask a husband. But, not the first woman to nag him either.

They go through three events where he lies to her and when she calls for the Philistines he breaks his bonds and eludes them. Fresh bow strings, new ropes, weave the seven locks of his head. But then he makes that same mistake. He gives in to the nagging.

16 And it came about, when she pressed him daily with her words and urged him, that his soul was annoyed to death. 17 So he told her all that was in his heart and said to her, “A razor has never come on my head, for I have been a Nazirite to God from my mother’s womb. If I am shaved, then my strength will leave me and I will become weak and be like any other man.”

His loving wife shaves his head and his strength leaves him. The Philistines seize him and gouge out his eyes and put him in prison.

The Lords of the Philistines have Samson bound in shackles grinding at the mill. The Philistines throw a big celebration to offer sacrifices to their god Dagon. They rejoice and believe it is because “Our god has given Samson our enemy into our hand.” But hair grows back, and Samson’s hair begins to grow back while he’s in prison.

When the Philistine celebrations gets fired up, they call Samson out of prison to entertain them. They make him stand between two pillars of the house where the party is being held. About three thousand people are in the house partying and watching Samson perform. Then Samson Called to the LORD.

28 Then Samson called to the Lord and said, “Lord God, please remember me and please strengthen me just this time, O God, that I may at once take vengeance on the Philistines for my two eyes.” 29 Then Samson grasped the two middle pillars on which the house rested, and braced himself against them, the one with his right hand and the other with his left. 30 And Samson said, “Let me die with the Philistines!” And he pushed outwards powerfully, so that the house fell on the governors and all the people who were in it. And the dead whom he killed at his death were more than those whom he killed during his lifetime.

He Killed More in His Death than in His Life

Samson’s brothers bury him in the tomb of his father Manaoh. He judged Israel 20 years. A sad ending to a life that began with such promise. To be a nazarite devoted to the LORD from birth, but he ends up marrying into the nation he is supposed to be delivering Israel from (twice)

His weakness for wives and their nagging cost him his strength from the LORD, his eyes, and eventually his life. But, at his end, he remembered to call on the LORD. I pray that we all can remember to call on the LORD always. In good times to give thanks and to worship and to give him Glory.

He will be there in the bad times, but maybe, just maybe we could avoid some bad times if we would remember to give GOD the credit and glory at all times. We need him as much, if not more, when times are good. Because that, is when we fall. 🙁