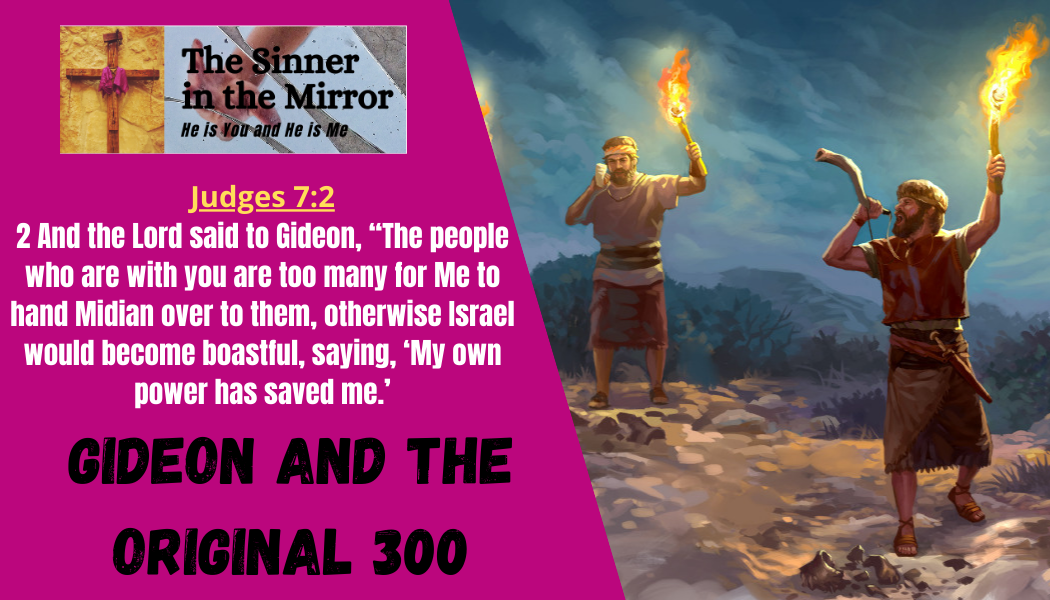 You may have heard, or read, the story of King Leonidas of Sparta and his brave 300. How they held off the massive Persian Army for several days and ultimately gave their lives for their country. They even made a movie titled “The 300”. Centuries earlier, there was another 300. Maybe you’ve heard of them from the Gideon Bible Story.

The story of Gideon and his 300 in the bible starts with the all too familiar words: The Israelites did what was evil in the sight of the LORD, and the LORD gave them into the hand of Midian seven years. The Midianites oppressed the Israelites, taking everything. Their livestock, their crops and left them destitute. They cried out to the LORD. Don’t we always when we’re in trouble?

The Angel of the LORD

Gideon is an interesting man. Nothing special, in fact, he’s hiding in a wine press trying to beat out some wheat so the Midianites don’t see him and take it from him. Not a real profile in courage or gallant warrior type. Yet the Angel of the LORD came to him.

The Angel of the LORD commissions Gideon to deliver Israel from the Midianites. Gideon protests, saying, ” my clan is the weakest and I and the weakest in my clan”. God can make use of even the weakest of us. In fact, as we go through the story of Gideon, he seems to prefer it. 😉

14 And the Lord looked at him and said, “Go in this strength of yours and save Israel from the hand of Midian. Have I not sent you?” 15 But he said to Him, “O Lord, how am I to save Israel? Behold, my family is the least in Manasseh, and I am the youngest in my father’s house.” 16 Yet the Lord said to him, “I will certainly be with you, and you will defeat Midian as one man.”

Destruction of the Altar of Baal

That night the LORD tells Gideon to take his fathers bull (the second one, seven years old) pull down the altar to Baal that his father had built, cut down the sacred pole and build an altar to the LORD. Then sacrifice his dad’s bull as a burnt offering on it using the sacred pole for the fire wood.

Note: the bull is seven years old and it is the second one. The bible uses certain numbers over and over. Seven being a very prominent one, and usually when offering a sacrifice it’s the first of the herd a year old.

The next morning, the townspeople are not too happy with Gideon, as you can imagine. They want his father to turn him over so they can kill him. His dad’s response is “If Baal is a god, let him contend for himself” Gideon from that day on was called Jerubbbaal (let Baal contend against him).

31 But Joash said to all who stood against him, “Will you contend for Baal, or will you save him? Whoever will contend for him shall be put to death by morning. If he is a god, let him contend for himself, since someone has torn down his altar!”

Then all the Midianites and Amalekites came together to raid Israel again. But the spirit of the LORD took possession of Gideon.

Gideon calls together the Isrealites to go to war with Midian, but then he does something strange. He questions GOD. Testing him “to know whether you will deliver Israel by my hand”. Gideon lays a fleece of wool on the floor and proceeds to tell GOD, that if there is dew on the fleece in the morning but the ground is dry, then he will know that GOD will deliver Israel. The next morning, you guessed it, the fleece is wet but the ground is dry. But, for Gideon, this ain’t good enough.

Gideon says, “one more time GOD” 😉 tonight let’s try it again except this time the fleece will be dry and the ground wet. Well, GOD in his infinite patience does just that. The next morning the fleece is dry and the ground wet. Get this, his enemies are gathered and ready to invade, but Gideon spends two days questioning the word of the creator of the universe. Sound familiar? Don’t we do the same thing?

Now, finally, Gideon and the Israelites are ready to battle the Midianites. Well, not so fast, GOD has other plans. Gideon has too many troops. The Israelites will try to take credit for the victory. GOD wants to make sure that there is no doubt who is responsible for defeating the Midianites.

Everybody who is fearful, is sent home leaving only 10,000 solders. God says, “still too many” take them to get a drink and only those who bend down and lap up water like a dog will go to battle. The rest are to be sent home. “Dog Soldiers?” So, Gideon is left with 300 who lap water like a dog, to go to battle with over one hundred thirty-five thousand Midianites.

5 So he brought the people down to the water. Then the Lord said to Gideon, “You shall put everyone who laps the water with his tongue as a dog laps in one group, and everyone who kneels down to drink in another.” 6 Now the number of those who lapped, putting their hand to their mouth, was three hundred men; but all the rest of the people knelt down to drink water. 7 And the Lord said to Gideon, “I will save you with the three hundred men who lapped, and will hand the Midianites over to you; so have all the other people go, each man to his home.”

Sounds like tough odds right? Remember, GOD didn’t need ten thousand, he didn’t need the 300, he didn’t even need Gideon. He spoke the universe into existence, he could have simply spoke the Midianites into non-existence. But he chose to use Gideon and the 300 to demonstrate his power and also his provision for the Israelites.

The Conqueror of Midian

Gideon his 300 men holding torches in jars and trumpets surround the Midianite camp of one hundred thirty-five thousand troops. They break the jars and blow their trumpets and the Midianites panic. “The LORD set every man’s sword against his fellow and against all the army” It’s a rout and Midian is defeated. Happy ending right? Well, not so fast, this is Israel and they have a bad habit.

The Israelites want Gideon to rule over them. He declines and says. “The LORD will rule over you.” Wise man, but then he takes some gold ear rings from the Midianite troops and makes an ephod of them. And, “all Israel prostituted themselves to it”. But, the land did have rest for the next forty years in the days of Gideon. But……

33 Then it came about, as soon as Gideon was dead, that the sons of Israel again committed infidelity with the Baals, and made Baal-berith their god. 34 So the sons of Israel did not remember the Lord their God, who had saved them from the hands of all their enemies on every side;

How soon we forget all that GOD has done for us and we return to our old ways. Why do we seem to only remember GOD when we’re in trouble and in desperate circumstances? Try to remember, when things are good, It’s GOD’s provision and protection. Give him the credit, or he may just let you find yourself in trouble again……and again.