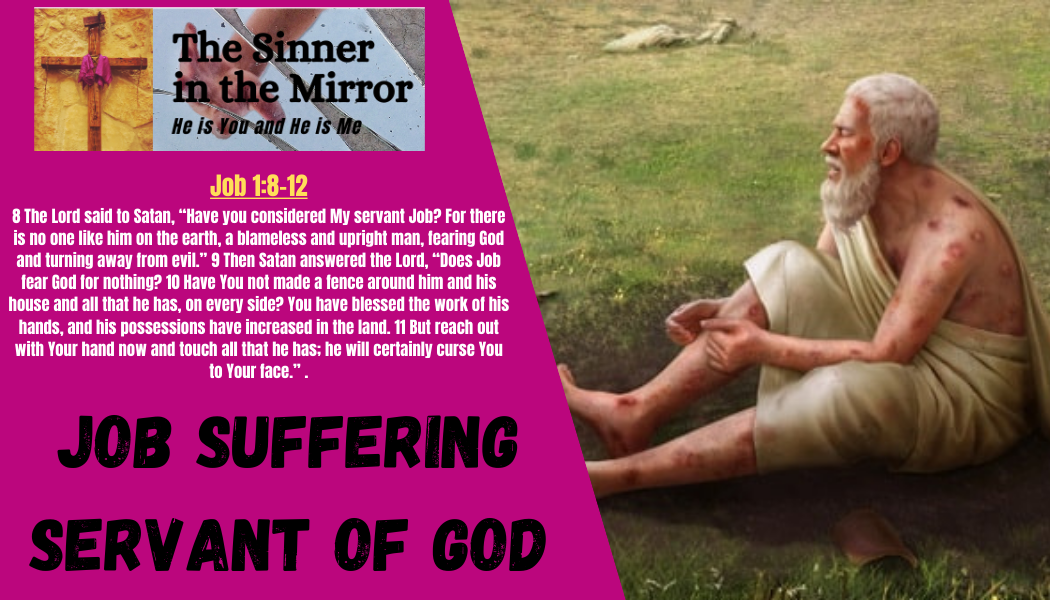 Most of us who have some familiarity with the Bible have at least heard of the story of Job the suffering Servant of God. It is a rather dramatic story and one that, at least for me, raises a number of questions. Like I’ve mentioned before, I am no theologian and I have no formal seminary training. That being said, I am fully aware that I may ruffle some feathers here.

There seems to be an overriding, or backstory, to the book of Job. This contest or conflict between God and Satan. Job just seems to be thrust into this conflict. Minding his own business and then one day, he is the object of the challenge of Satan to God. And, his children are all killed, many of his servants as well, almost like collateral damage. Seems rather unfair, and I realize that I am the clay trying to question the potter, but it is the nature of man to wonder.

Satan and the LORD

All the heavenly beings come to present themselves before the LORD, and Satan is among them. God question Satan about where he has come from. Then he asks Satan if he has considered Job? So, God offers up Job. He wasn’t even on Satan’s radar, but it is almost like a challenge from God to Satan. Of Course, Satan being Satan, he challenges God right back.

8 The Lord said to Satan, “Have you considered My servant Job? For there is no one like him on the earth, a blameless and upright man, fearing God and turning away from evil.” 9 Then Satan answered the Lord, “Does Job fear God for nothing? 10 Have You not made a fence around him and his house and all that he has, on every side? You have blessed the work of his hands, and his possessions have increased in the land. 11 But reach out with Your hand now and touch all that he has; he will certainly curse You to Your face.” 12 Then the Lord said to Satan, “Behold, all that he has is in your power; only do not reach out and put your hand on him.” So Satan departed from the presence of the Lord.

Now, here it becomes difficult for some of us. God is Love, God is not evil, yet he allows Satan to harm Job. Not only that, he suggests Job to Satan, then gives him permission to harm first his wealth and then his health. Job, as you can imagine, is distressed and perplexed about his change in fortunes.

Satan’s first attack on Job is his wealth and family. All of his livestock is stolen or burned up when the “fire of God fell from heaven”, including his servants that attended them. Then all of his children are killed when a great wind suddenly causes the house they are in to collapse on them killing them all.

20 Then Job got up, tore his robe, and shaved his head; then he fell to the ground and worshiped. 21 He said, “Naked I came from my mother’s womb, And naked I shall return there. The Lord gave and the Lord has taken away. Blessed be the name of the Lord.” 22 Despite all this, Job did not sin, nor did he blame God.

So, Job remains blameless despite all that happens to his family and wealth, but what about the kids and the servants that were killed. Why were they sacrificed? What did they have to do with anything, other than being associated with Job? They’re all dead. Now, I know, I know, none are righteous not even one, but that doesn’t really satisfy my curiosity.

It does kinda put things in perspective. We all want to sympathize with Job, we can even think we have been like Job on occasion, but what if we are the kids? Or, the Servants? Maybe we are just collateral damage in a much bigger story. It might not even be about us. Helps you realize that, none of us is the center of the universe. Also, helps to emphasize that the story is about the eternal, not just the temporal.

Again, the heavenly beings appear before the LORD and Satan is there. And, again, God challenges him about Job and how even though Satan took his wealth and family he has remained blameless and upright. Satan’s answer is that well, reach out your hand and touch his bone and flesh and he will curse you. Threaten his life and he won’t be so blameless.

3 The Lord said to Satan, “Have you considered My servant Job? For there is no one like him on the earth, a blameless and upright man fearing God and turning away from evil. And he still holds firm to his integrity, although you incited Me against him to ruin him without cause.” 4 Satan answered the Lord and said, “Skin for skin! Yes, all that a man has, he will give for his life. 5 However, reach out with Your hand now, and touch his bone and his flesh; he will curse You to Your face!” 6 So the Lord said to Satan, “Behold, he is in your power, only spare his life.”

I notice that Satan tells God to stretch out his hand and touch Job’s flesh. God doesn’t do it himself, but again, he allows Satan to do it. And, Job now is afflicted with painful sores all over his body. At this point even Job’s wife is telling him to give up, curse God, and die.

10 But he said to her, “You are speaking as one of the foolish women speaks. Shall we actually accept good from God but not accept adversity?” Despite all this, Job did not sin with his lips.

So, now job has gone from a wealthy and prosperous man to poor and diseased. Yet he does not blame God, but he has no idea why this is happening to him. But his “Friends” come to see him and offer their counseling. Which basically becomes condemnation and accusations. Some friends huh?

Job’s Answer from his Friends

The book of Job contains many chapters of the various attempts at answers from the friends of Job. And, mostly they consist of accusing Job of being wrong, having some hidden unconfessed sin. They go on an on how God is good and only punishes the sinner and that Job must be guilty. And, while the raise some good points and even are correct in some of their assessments of the character of God, Job is persistent in his claim of innocence.

In fact, Job is desperate for answers. He pleads with them to tell him or show him what exactly it is he has done to warrant such punishment or discipline. They, of course, don’t have the answers. And, Job get’s tired of their accusations. He starts to question God, wanting an answer, an audience with God to plead his case and his innocence.

Now, Satan has exited the story and we don’t hear from him anymore. The inflictor of the pain is nowhere to be found. Everyone accuses God of inflicting the punishment and never once Satan, Curious. Eventually, God enters the picture and gives Job and answer out of a whirlwind, but perhaps not the answer he was expecting.

Job’s Answer from the LORD

God’s answer to Job is: “Who are you to question me?” God reminds Job who created the universe, and who is in control of all things. The list is long and extensive. Just how magnificent is the creation and work of God. How can any mortal question God. A very humbling and awe-inspiring scene for sure. And Job answers God in repentance for ever questioning him.

Then Job answered the Lord and said, 2 “I know that You can do all things, And that no plan is impossible for You. 3 ‘Who is this who conceals advice without knowledge?’ Therefore I have declared that which I did not understand, Things too wonderful for me, which I do not know. 4 ‘Please listen, and I will speak; I will ask You, and You instruct me.’ 5 I have heard of You by the hearing of the ear; But now my eye sees You; 6 Therefore I retract, And I repent, sitting on dust and ashes.”

Job’s friends are present for all this because God then speaks to them, and condemns them for not speaking correctly about him like Job has and orders them to sacrifice seven bull and seven rams and for Job to offer a prayer for them. Then the LORD restores the fortunes of Job and gives him twice as much as he had before.

16 After this, Job lived 140 years, and saw his sons and his grandsons, four generations. 17 And Job died, an old man and full of days.

A happy ending? I guess. But what if you had 10 of your children die? Would you be comforted with twice as much wealth as you had before? Some of your servants burned alive while tending your sheep or killed by raiding parties while watching your camels. Would you be satisfied with the answer: “who are you to ask me?”

This over-riding battle between God and Satan appears throughout the bible from the serpent in Genesis, to here with Job, to the temptation of Jesus, and eventually to his final downfall in Revelation.

One thing is for sure, God has his plan and he is sovereign over all things. We may think ourselves important, but, as Job found out, it can all be gone in an instant.

Even Satan must ask permission. I certainly don’t know the answers, Some new testament doctrines that we are familiar with now, were not around at the time of Job. The Book of Romans wasn’t available to Job.

I keep returning to the thought that to understand God we must begin to think eternally, not earthly or temporally. Our reward is in heaven and eternity is much much longer than this short life here on earth.

Please if you have insights or opinions, comments or suggestions, I would love to hear them. Please leave them in the comment section below and I look forward to getting back with you.You can follow me on Facebook: The Sinner in the Mirror, Instagram: thesinnerinthemirror, and Twitter: @SinnerMirror. May the God of Job bless you and keep you and provide you all the answers you seek.