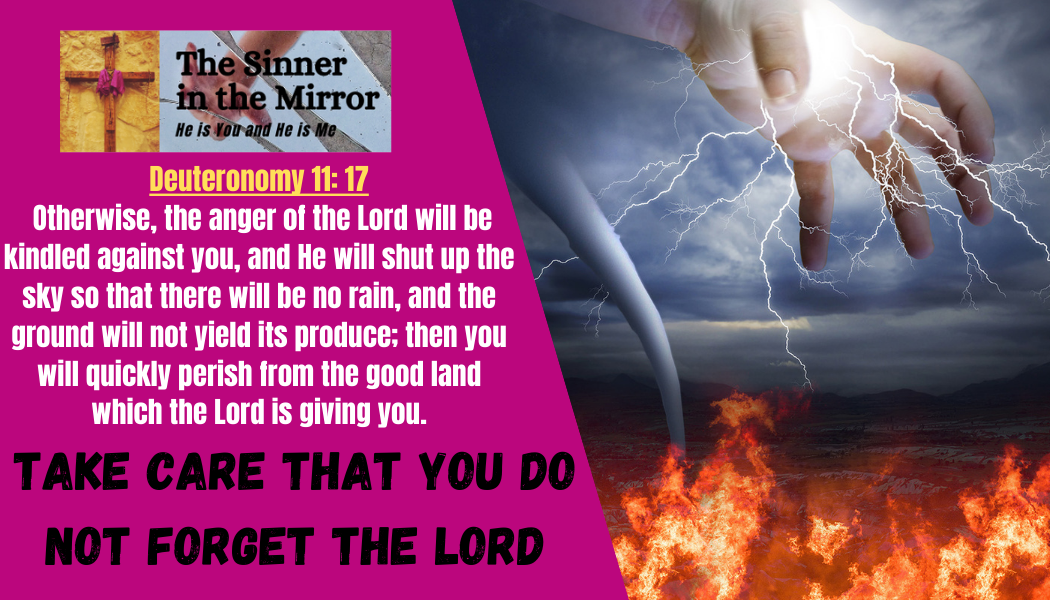 Deuteronomy, the last of the five books of Moses, has always been one of my favorites. Moses lays out the LAW, for real, and recounts all that the LORD has done for his people. Everything from delivering them from Egypt and all the plagues to the Manna for food and water out of rock.

Now as they are preparing to finally enter the promised land of Canaan, the LORD has delivered kingdoms into their hands. Nations much bigger and more powerful than they were. Defeated the plans of king Balak of Moab using Balaam to bless instead of curse Israel. You can read my post on Balaam and his talking donkey for the that story. All of this they have witnessed for themselves firsthand, not to mention having the presence of GOD with them in camp.

Your Own Eyes Have Seen

King Sihon of Heshbon would not let Israel pass through his land and came out to do battle. The LORD handed him over to Israel and they destroyed everyone. Men, women and children, no survivor was left. King Og of Bashan suffered the same fate when he chose to confront Israel.

21 And I commanded Joshua at that time, saying, ‘Your eyes have seen everything that the Lord your God has done to these two kings; the Lord will do the same to all the kingdoms into which you are about to cross. 22 Do not fear them, for the Lord your God is the One fighting for you.’

Moses warns the people that they must keep the commandments of the LORD. “You have seen for yourselves what the LORD did with regard to the Baal of Peor – how the LORD destroyed from among you everyone who followed the Baal of Peor, while those of you who held fast to the LORD are still alive today..”

“But take care and watch yourselves closely, so as neither to forget the things that your eyes have seen nor to et them slip from your mind all the days of your life; make them known to your children and your children’s children..” They have witnessed all these signs, wonders and acts of power by GOD, yet they still must be warned and they still stray away.

The LORD is GOD, There is No Other

For the LORD your God is a devouring fire, a jealous God. Moses warns them that if they get complacent and make for themselves an Idol of anything, or they will be utterly destroyed: “The LORD will scatter you among the peoples; only a few of you will be left among the nations”.

A very prophetic message as we know from history that Israel was indeed scattered the world over and for nearly two thousand years was without a homeland.

35 You were shown these things so that you might know that the Lord, He is God; there is no other besides Him.

39 So acknowledge today and take to heart that the LORD is GOD in heaven above and on the earth beneath; there is no other.

Moses again warns, “Do not follow other gods.The LORD is a jealous GOD. The anger of the LORD would be kindled against you and he would destroy you from the face of there earth..” Seems to be a pretty stern warning and given what they have all witness, one you would think they would take seriously.

Make No Covenant with Them

When they enter the promised land, they were not to associate with the nations that occupied the land. Don’t inter marry with them because as we saw with the Baal of Peor incident, that would lead to getting involved with their gods and religions. Again angering the LORD and bringing his punishment. They were to “devour all the peoples that the LORD was giving over to them, to show them no pity and by all means do not worship their gods.

If they will only keep the LORD’s commandments GOD will bless them and multiply them. God will keep his covenant with those who love him and keep his commandments to the thousandth generation.

2 and when the Lord your God turns them over to you and you defeat them, you shall utterly destroy them. You shall not make a covenant with them nor be gracious to them.

7 “The Lord did not make you His beloved nor choose you because you were greater in number than any of the peoples, since you were the fewest of all peoples, 8 but because the Lord loved you and kept the oath which He swore to your forefathers, the Lord brought you out by a mighty hand and redeemed you from the house of slavery, from the hand of Pharaoh king of Egypt.

GOD was honoring HIS covenant with their ancestors. They didn’t merit any special stature. In fact, as we have read they were subject to the same failing as some of the nations being destroyed. GOD is true to his word, a fact that we should take great comfort in.

It is NOT Because of Your Righteousness

Moses makes if very plain that they were not to get proud of themselves and try to take credit for themselves. But to remember the LORD their GOD is the one who has provided for their success and victories. It was not because of their righteousness but a fulfillment of GOD’s promise made to Abraham, Isaac and Jacob.

4 “Do not say in your heart when the Lord your God has driven them away from you, ‘Because of my righteousness the Lord has brought me in to take possession of this land.’ Rather, it is because of the wickedness of these nations that the Lord is dispossessing them before you.

5 It is not because of your righteousness or the uprightness of your heart that you are going in to take possession of their land, but it is because of the wickedness of these nations that the Lord your God is driving them out from before you, and in order to confirm the oath which the Lord swore to your fathers, to Abraham, Isaac, and Jacob.

6 “Know, then, that it is not because of your righteousness that the Lord your God is giving you this good land to possess, for you are a stubborn people.

Moses warns again to be careful not to forget the LORD your GOD and exalt yourself. GOD has done this and he should get the credit. Whatever you have or whatever good thing you have done, is by the LORD’s provision.

What Does the LORD Your GOD Require?

And, again Moses warns, DO NOT BE SEDUCED INTO FOLLOWING OTHER gods. The anger of the LORD will be kindled and you will perish off the land. Must be serious, keeps getting repeated over and over. But guess what, they don’t heed this warning either; nor do we. 🙁

So Moses lays it out for them. A choice. Blessing or Curse. Obey the LORD’s commandments and receive blessing. Do not obey and turn away to follow other gods, a curse.

5 So you are to know in your heart that the Lord your God was disciplining you just as a man disciplines his son. 6 Therefore, you shall keep the commandments of the Lord your God, to walk in His ways and to fear Him.

The commands are the same, we have a new covenant but if we turn away and follow other gods (idols) put other things first in our lives before GOD, we anger HIM and will face discipline. And discipline is rarely pleasant. I pray that we can learn the lessons of the Israelites and not forget the LORD our GOD.