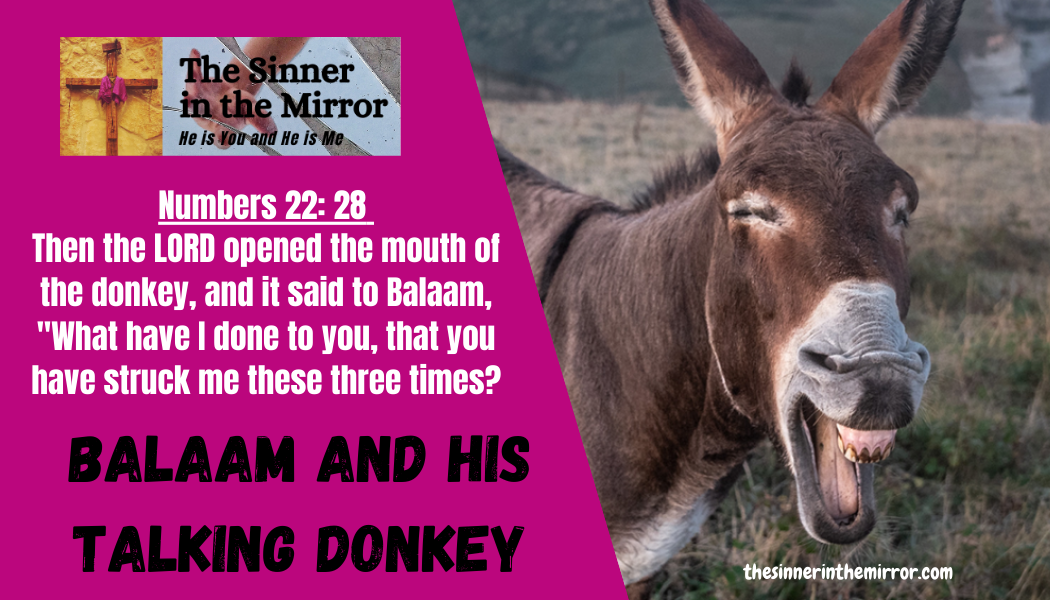 Why a talking donkey? Like they say, the LORD works in mysterious ways. The 40 years of wilderness wanderings is winding down. The old generation has died off and their children are preparing to finally take possession of the promised land. And then comes Balaam and his donkey.

The Israelites are gradually working their way toward the Jordan River and the edge of the promised land of Canaan. In the process the LORD has delivered decisive victories for them over the King of Arad, King Og of Bashan and King Sihon of the Amorites. They killed them, left no survivors and took all their possessions.

Now they have settled in the plains of Moab just across the Jordan from Canaan. Balak, king of the Moabites has seen what the Israelites have done to the Amorites.

Numbers 22: 3 Moab was in great dread of the people, because they were so numerous: Moab was overcome with fear of the people of Israel.

Balak sends for a sorcerer from the east named Balaam, to put a curse on the Israelites so maybe then he can defeat them and drive them away. When his people get to Balaam, his answer is simple. “I will bring back word to you, just as the LORD speaks to me”.

Now here is a sorcerer, a wizard, one who deals in magic. He knows who the LORD is, but to him he is just one of many “gods”. Balaam knows enough to not go against the word of the LORD and tells the messengers of Balak as much. God comes to Balaam in the night and tells him not to go with them or to curse the Israelites.

Balak tries again and Balaam responds with, “I could not go beyond the command of the LORD my GOD”. A curious response from a magician as he had many gods. But, God comes to him again and tells hem to go with the messengers this time. And, now the donkey story.

God was angry that Balaam was going and the angel of the LORD stood in the road and blocked his way. Balaam can’t see the angel, but the donkey can. The donkey stops and Balaam hits it to try to make it go and eventually the donkey just lays down in the road.

Why? This has very little to do with the actual story of Balaam. I mean if you left it out the story would still turn out the same. God had spoken to Balaam directly, why now through a donkey? I’m sure there are theologians and those much more versed in scripture than me that have an explanation. One thing for sure, GOD gets Balaam’s attention. GOD may be speaking to and through Balaam, but he can be replaced, GOD can talk through a donkey.

Don’t be too impressed when someone says GOD Spoke to them, GOD spoke through Balaam’s donkey, if they are not careful they may just make an ass out of themselves 😉 The angel of the LORD, some have suggested, is a pre incarnate Jesus. Again, way above my pay grade, but an interesting thought nonetheless.

How Can I Curse Whom GOD has not Cursed?

Balaam gets to Balak and when asked to curse the Israelites, tells Balak, in person, “The word that GOD puts in my mouth, that is what I must say”. They build seven altars and offer sacrifices on each one. GOD meets Balak and has him bless them instead of curse them.

This is repeated two more times. The Bible uses certain numbers over and over throughout. The number 7, seven altars, seven days of creation. The number 3, three different times Balak offered sacrifices and each time GOD met with him and had him bless the Israelites instead of curse them. Christ in the tomb for three days.

Of course, in all of this, Balak is pretty mad at Balaam. “I have summoned you to curse my enemies, but instead you have blessed them these three times”. Balaam told him again, ” I told your messengers that it didn’t matter how much money you give me, I can’t go beyond the word of the LORD, to do either good or bad of my own will: whatever the LORD says, that is what I will say”. (My paraphrase) Then he tells king Balak, “now I am going to my own people, but let me give you some advice about what this people will do to your people”.

A Scepter Shall Rise out of Israel

The Oracle of Balaam. Numbers 24: 17-20 “I see him, but not now; I behold him, but not near– a star shall come out of Jacob and a scepter shall rise out of Israel; it shall crush the borderlands of Moab, and the territory of the Shethites. Edom will become a possession, Sier a possession of its enemies, while Israel does valiantly. One out of Jacob shall rule, and destroy the survivors of IR”.

This “scepter” some commentaries indicate is a prophecy of the birth of Jesus and may have been the prophecy that convinced the three “wise men from the east” to seek the coming of the king of the Jews. An interesting connection and another indicating that the Bible really is one book. The old testament sets up the new testament and to understand the Bible you need to study both.

The LORD Their GOD is with Them

Quite the story. The talking donkey, a sorcerer from the east called to curse Israel and a scared king of Moab. But in the end, the most important thing, “The LORD their GOD is among them, acclaimed as a king among them.” No man, king, magician or his talking donkey could do anything to GOD’s chosen people.

Then, as is now, this is GOD’s story, HIS plan, HIS will and it is all for HIS Glory. Everything belongs to him and if we are fortunate enough to be one of his chosen people, no matter what hardships or difficulties we may face, we can hold fast to his promises in his word.