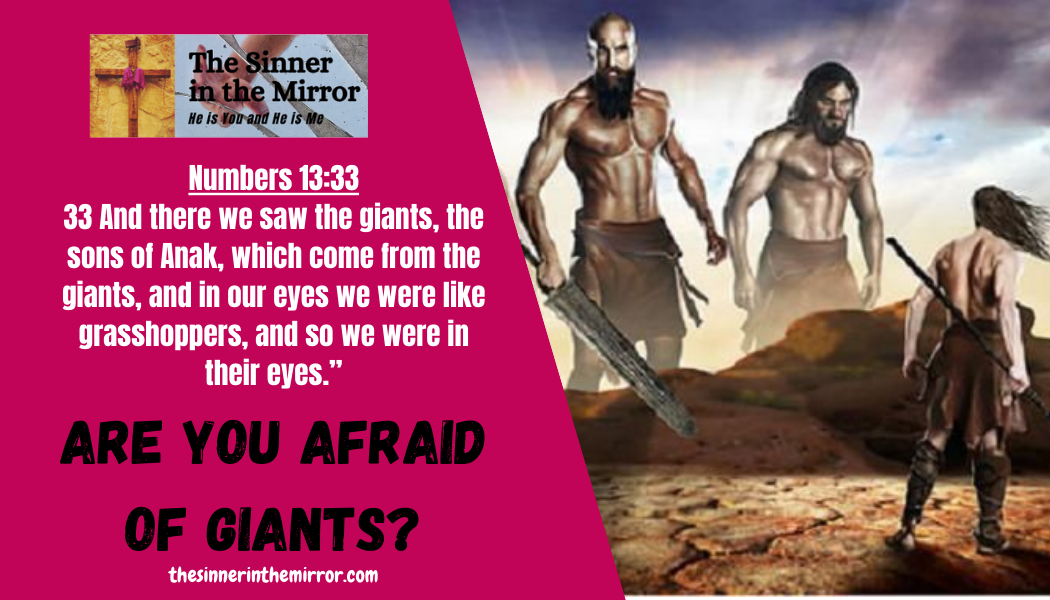 Let’s take a walk now through the the book of numbers. The Israelites have been counted and organized, and now in Numbers 13, they stand on the very precipice of the promised land. The LORD tells Moses to send spies into the land to check it out. The land was everything the LORD has said it would be, and more, but…… Out of fear and lack of faith, well, they end up wandering in the wilderness for 40 years. Which begs to question, are you afraid of your “giants”?

Spying Out The Land

The LORD tells Moses to send out one man from each of the 12 ancestral tribes of Israel to spy out the land of Canaan. The “Promised Land”, the land promised to Abraham over six hundred years earlier. The spies spend 40 days assessing the land and its cities and inhabitants. A round trip of nearly 500 miles.

The spied out the land, and even brought back a cluster of grapes so big that had to carry it on a pole between two of them. And then, they came back to Moses and the whole congregation with their report.

A Land Flowing with Milk and Honey

Ahh yes, the report. They said,” the land flows with milk and honey, But……. The people who live in the land are strong with very large and fortified cities. And there are Giants, to them we look like grasshoppers.” Ten of the twelve spies report that the inhabitants are two strong.

32 They gave the children of Israel a bad report of the land which they had spied out, saying, “The land through which we have gone as spies is a land that devours its inhabitants, and all the people whom we saw in it are men of great stature. 33 And there we saw the giants, the sons of Anak, which come from the giants, and in our eyes we were like grasshoppers, and so we were in their eyes.”

Two, Caleb and Joshua, trusted in GOD and  encouraged the congregation to take the land.

7 And they spoke to all the assembly of the children of Israel, saying, “The land which we passed through to explore it is a very, very good land. 8 If the Lord delights in us, then He will bring us into this land and give it to us, a land which flows with milk and honey. 9 Only do not rebel against the Lord, nor fear the people of the land because they are bread for us. Their defense is gone from them, and the Lord is with us. Do not fear them.”

So, the good news was that yes, the land was good and flowed with milk and honey, just like the LORD promised. The bad news, there were people already living there and they were strong and some were BIG. The response from the congregation was typical. “Why did the LORD bring us out of Egypt to fall by the sword? Let us chose a captain, and go back to Egypt.”

A frequent refrain from the Isrealites ever since the LORD led them out of Egypt. For four hundred years they had been slaves in Egypt. Abused and mistreated by their Egyptian task masters. They cried out to the LORD for help and he heard their plea. He brought them out of Egypt in a very dramatic fashion. Ten plagues, from frogs to flies to giant flaming hail stones and eventually the death of the firstborn of Egypt.

The Isrealites had seen this firsthand. The miraculous power of God. He parted the Red Sea so they could cross on dry land. Rained manna from heaven so they would have food to eat in the wilderness. Made water come out of a rock so they could drink. Led them by day in a pillar of cloud and by night in a pillar of fire. I mean, on and on, these people witnessed God in their midst and saw firsthand his power, yet they still doubted.

The LORD had already delivered two Kingdoms into their hands, but here they stand afraid to take possession of God’s promised land because the people that live there are strong and “giants”. Amazing to me, but then again, the story of the bible is filled with man’s continued rebellion and or lack of faith. God, physically leading them to the promised land, performing miracle after miracle and yet they still don’t trust in him.

We’re no different now. If anything, we are worse. We may not have a pillar of cloud or fire leading us today, but I know I have prayed for GOD to get me out of situations. And, on many occasions he has heard my plea and delivered me. Yet, I find myself looking back thinking maybe I should have stayed where I was. My own Egypt, if you will.

“How Long Will This People Despise Me?”

And the LORD said to Moses, “How long will this people despise me? And how long will they refuse to believe in me, in spite of all the sighs that I have done among them?” GOD is ready to strike them down and start over. Wouldn’t be the first time, remember Noah and the flood? Not the first time he’s considered doing the same to this people. They have already tested him ten times on this journey from Egypt.

Moses intervenes again with the curious logic: “then the nations who have heard about you will say, ‘It is because the LORD was not able to bring this people into the land he swore to give them that he has slaughtered them in the wilderness’. Here is a good place to examine exactly what the “chosen people” means.

The “Chosen People”, chosen for what? As you can read, it certainly wasn’t because they were strong or virtuous or even very good for that matter. Now, I know the whole descendants of Abraham promise, but what was the purpose in this people? At this time in human history, people are worshiping many so called “gods”. The ten plagues of Egypt were specific attacks on the gods of Egypt.

Read Exodus 14:18 ” And the Egyptians shall know that I am the LORD, when I have gained glory for myself over Pharaoh, his chariots and his chariot drivers.” It is, and always has been about GOD and HIS Glory. This “chosen people”, as we are now, chosen to show the “nations” that the LORD is the one and only true GOD.

Even the Isrealites, chosen though they were, needed reminding of that fact. They had spent 400 years in Egypt and knew about the gods of Egypt. There was no church or temple or synagogue yet, GOD was demonstrating his power and glory to all the nations through this chosen people the Israelites. And, as he has threatened several times, he is more than capable of raising up for himself another people, if necessary.

Anyway, back to the story, by a vote of 10-2 the spies recommend to head back to Egypt. And, as a result, they bring the wrath of GOD on themselves. “As I live says the LORD, I will do to you the very things I heard yo say: your dead bodies shall fall in this very wilderness”.

For the next forty years they will wander the wilderness until the entire adult population that refused to follow GOD and take possession of Canaan, has died. Except for the two spies who believed GOD, Joshua and Caleb. For the fear of giants and a lack of faith in GOD, they got nothing. No promised land, not back to Egypt, just a lingering, wandering existence i the wilderness and then death.

We all face our own giants. The question now, as it was then, will you trust GOD to deliver you. Do you have faith to face your giants? As Joshua and Caleb told the congregation of the Israelites, ” the LORD is with us, do not fear them.” Trust, Faith and obedience which brings the promised land, or fear and rebellion which bring wilderness and death.

Just the thoughts of a laymans’ layman. Humbly submitted in the peace, love and grace of our LORD Jesus Christ.