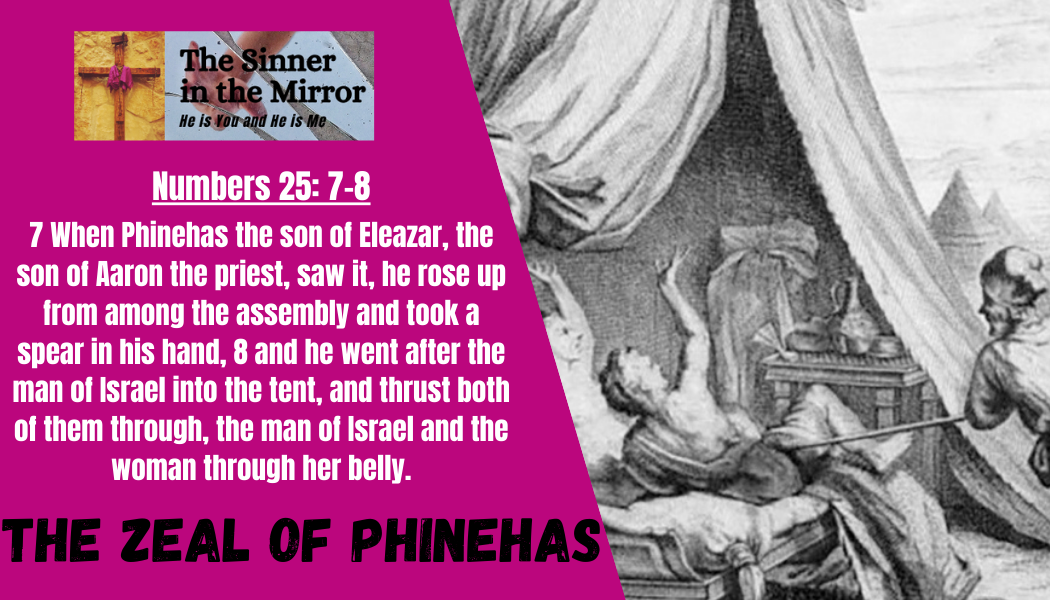 God has just used the eastern mystic Balaam to thwart Balak, the king of Moab’s plans of cursing the Israelites. He ends up blessing them instead. But, Balaam is not done, he has another plan, and the men of Israel fall right into his trap. And, if not for the Zeal of Phinehas, the people of Israel would be facing GOD’s wrath again. See, the men of Israel have a weakness. A weakness common to most men in general, both then and now. In case you can’t guess, that weakness is SEX. While camped out in the plains of Moab, the men of Israel began to have sex with the women of Moab.

With the very presence of GOD in the camp, the Israelite men go off commiting sexual sins with the women of the nation of Moab. It may be worse now, as our bodies are the LORD’s temple and his Holy Spirit lives in us. Yet we still sin.

The Women of Moab

You see Balaam has decided that if he can’t curse the people of Israel, maybe he can use the women of Moab to seduce them into committing sexual immorality and idolatry. Then, GOD will be angry with them and punish them. You guessed it, the men of Israel fell right into his trap.

16 Behold, they caused the sons of Israel, through the counsel of Balaam, to be unfaithful to the Lord in the matter of Peor, so that the plague took place among the congregation of the Lord!

Moabites didn’t worship GOD. They had their own gods and these Moabite women begin to invite the Israelite men to parties and celebrations where they were sacrificing to their gods. And, the men began to bow down to their gods. Right in front of the one true GOD in their midst.

The “gods” of Moab and the Baal of Peor

The Moabites were like the rest of the pagan nations occupying the promised land of Canaan. They had many gods and practiced all sorts of pagan sacrifices and rituals. One of the many reasons GOD was driving them out of the land before Israel. Baal was their most popular god and Baal worship involved prostitution. Baal worship will be a continual temptation among Israel in the land of Canaan as we will see going forward.

3 So Israel became followers of Baal of Peor, and the Lord was angry with Israel. 4 And the Lord said to Moses, “Take all the leaders of the people and execute them in broad daylight before the Lord, so that the fierce anger of the Lord may turn away from Israel.”

The Anger of the LORD

The LORD means business when he says ” you shall have no other gods before me”. Moses tells the tribal leaders of Israel to kill any of their clan that have become worshipers of Baal. No second chance, no time out, no flogging, no sacrifice for atonement, just execution.

Something to keep in mind for us today. When we place anything in our lives ahead of GOD, we are practicing idolatry and creating our own “gods” if you will. Do you think GOD is serious today as he was then about “you shall have no other gods before me” ? It’s easy to get distracted by the ways of the world. Money, fame, possessions, sports, entertainment, family, friends…….. where does GOD fit in?

I know I fall short and let many other “things” distract me from GOD. Maybe HE won’t impale me on a spear, but he does discipline those he loves. He loved us so much that he sacrificed his only SON for us. Yet we grieve him daily when we put worldly matters ahead of HIM. We deserve any discipline he may see fit to administer.

The Zeal of Phinehas

Now, if the story isn’t bad enough already, wait, it gets worse. While Moses and the congregation are meeting and in distress over having to execute some of their family members, here comes Zimri. In front of everybody, he brings a midianite woman in to camp and into his tent for a little sexual encounter.

Phinehas, son of Eleazar the priest, see this, gets up from the meeting and grabs a spear. He follows them into the tent and runs the spear through them both killing them.

Pretty drastic measures by Phinehas, but GOD is looking for people to take HIM seriously. Twenty four thousand Israelites are put to death for worshiping Baal, for not following the commandment to “have no other gods before me”.

You Shall have no other “gods” Before Me

The lesson for us is rather simple. GOD is serious about his commandments. They are not “suggestions” for us to consider. Guidelines or rules to casually observe or break. But, they are the very commands of GOD. The creator of the universe, the one true GOD. He is Holy and he demands his people to be Holy. And, with HIS help, grace, mercy and yes, discipline, one day we will be.

God is looking for a people to show the Zeal of Phinehas for him. To put him first. To have no other gods before him. To obey his commands. To be his chosen people. To be an example to all the nations of the world. I know I fail this test everyday, and I pray that with HIS help that I can shed the distractions and other “gods” and idols of the world. I am forever grateful for the sacrifice of Jesus to cover my sins while I learn to be conformed to his image.

Humbly submitted in peace and love by the grace our LORD Jesus Christ.