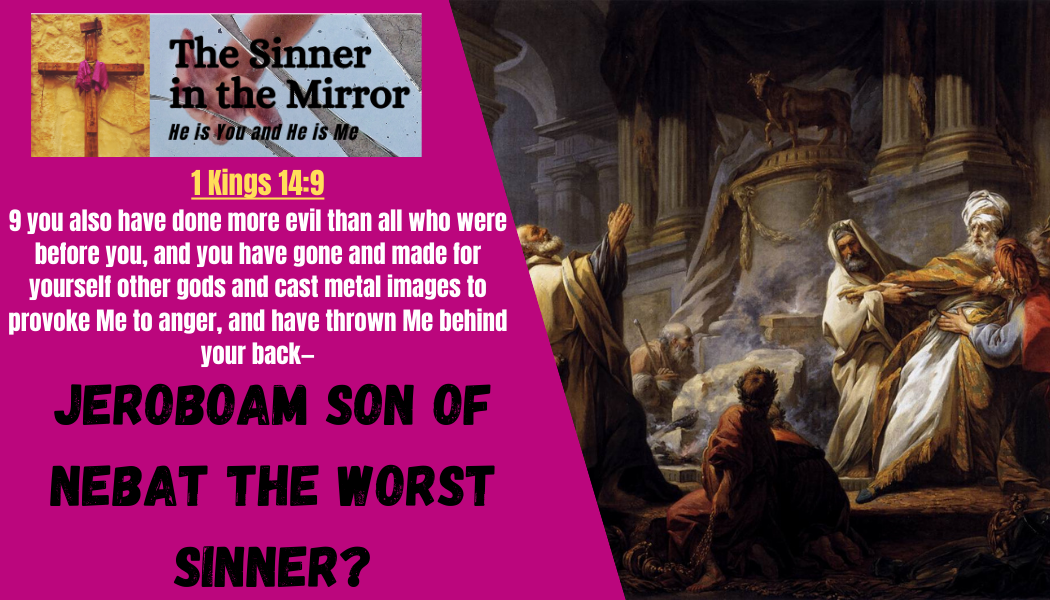 Jeroboam was a servant of king Solomon that led a rebelled against Solomon. In fact the LORD told Solomon that since he had gone off and worshiped the gods of his foreign wives, that the kingdom would be taken from him and given to one of his servants. Ahijah the prophet, at the LORD’s direction anoints Jeroboam king over the 10 tribes of Israel.

The LORD promises to be with him and give him an enduring kingdom,,,,,,,,,IF:

38 Then it shall be, that if you listen to all that I command you and walk in My ways, and do what is right in My sight by keeping My statutes and My commandments, as My servant David did, then I will be with you and build you an enduring house as I built for David, and I will give Israel to you.

So, chosen by GOD to become king of Israel, and given the promise of an enduring kingdom, he still chooses to do things his way instead of waling in the ways of the LORD. As a result, he sins and causes Israel to sin, and ends up being referred to as a sort of negative benchmark throughout the history of Israel.

Calves of Gold The Religion of Jeroboam

As promised, God doesn’t take the kingdom away from Solomon, but eventually Solomon “sleeps with his ancestors” and his son Rehoboam becomes king. And, Jeroboam returns from Egypt when he hears of Solomon’s death, he and all of Israel confront the new king about lowering the tax burden that Solomon had imposed on them. Rehoboam, on the advice of his young advisers, decides instead to increase their taxes.

14 and he spoke to them according to the advice of the young men, saying, “My father made your yoke heavy, but I will add to your yoke; my father disciplined you with whips, but I will discipline you with scorpions!” 15 So the king did not listen to the people; because it was a turn of events from the Lord, in order to establish His word which the Lord spoke through Ahijah the Shilonite to Jeroboam the son of Nebat.

As a result, the ten tribes of Israel rebel and make Jeroboam their king leaving Rehoboam only Judah and Benjamin. The Temple of the LORD was still in Jerusalem and the people of Israel still went there to sacrifice and worship the LORD. Jeroboam gets worried that the people may start slipping away from him and go back to Rehoboam because of the Temple.

He decides to start his own religion. He makes two calves of gold and tells the people that “here are your gods, O Israel, who brought you up out of the land of Egypt.” As you can imagine, the LORD was not pleased with this. Much of the story of the Bible to this point has been the LORD demonstrating that he is GOD, and there is no other.

This becomes a sin for the people of Israel go to worship and offer sacrifices to these idols. Jeroboam also appoints priests from among the people, who were not levies, to officiate his new religion. Jeroboam even appoints an annual festival like that of Judah. He alone comes up with the idea. Jeroboam, in an attempt to secure “his” kingdom, has created his own religion around idol worship and has turned from the LORD. Even worse, is he has cause the people of Israel to sin by worshiping these idols that he made.

Confrontation with the Man of God

Jeroboam is by his altar offering incense to his golden calves when “a man of GOD” comes out of Judah with a word of the LORD to proclaim against Jeroboam’s altar.

2 And he cried out against the altar by the word of the Lord and said, “Altar, altar, this is what the Lord says: ‘Behold, a son shall be born to the house of David, Josiah by name; and on you he shall sacrifice the priests of the high places who burn incense on you, and human bones shall burn on you.’”

Should be a good indication that the LORD is not pleased with his altar. Jeroboam reaches out his hand and orders “seize him”, but his hand withers, the altar is torn down and the ashes pour out. The king pleads with the “man of God” to pray for him that his hand might be restored. The man of God does and Jeroboam’s hand returns to normal.

The king invites the man of God to come home with him and dine with him, but the man of God refuses saying, “If you give me half your kingdom, I will not go in with you: nor will I eat food or drink water in this place.” The LORD has commanded him not to eat or drink while he is there, so he starts on his way back to Judah.

Then there is the curious appearance of “an old prophet” who hears of the man of GOD and goes to meet him. He asks him to come home with him and eat. The man of God repeats what he told Jeroboam, but the “old prophet” deceives him by saying that an angel spoke to him by the LORD and told him to bring him back so that he may eat.

21 and he cried out to the man of God who came from Judah, saying, “This is what the Lord says: ‘Because you have disobeyed the command of the Lord, and have not kept the commandment which the Lord your God commanded you, 22 but have returned and eaten bread and drunk water in the place of which He said to you, “You are not to eat bread nor drink water”; your dead body will not come to the grave of your fathers.’”

After he finishes eating, the man of God goes on his way and is killed by a lion. The old prophet take the body and buries it in his own grave telling his sons that when he dies to bury him alongside the man of God. This is a very curious story, an old prophet deliberately deceives a man of God. The Man of God, listens to him rather than consulting the LORD himself, and then the LORD proclaims judgment on the man of God through the old prophet who deceived him. Moral, I guess, is do what the LORD tells you, not some “old prophet”.

Word of the LORD from Ahijah

What does this have to do with Jeroboam? Well, he hears of all of this and you would think that by now, he would maybe want to take the LORD seriously and turn from his evil ways but:

Hardheaded like all of us, Jeroboam just continues doing it his way. It’s about this time that one of Jeroboam’s sons gets sick and he has his wife disguise herself and go to the prophet Ahijah. If you remember, Ahijah is the prophet who met Jeroboam on the road and anoints him king of Israel and tells him he will have an enduring kingdom IF he will walk in the ways of the LORD. Well, as we’ve seen, he couldn’t or wouldn’t do that.

Before Jeroboam’s wife gets to Ahijah, the LORD tells him she is coming and to tell her to go tell Jeroboam some bad news. Not only would his son die, but because he had done evil and made gods for himself and made Israel worship them as well, the Lord was going to eliminate the house of Jeroboam and that GOD had raised up a new king over Israel that would eliminate the house of Jeroboam.

The Sins of Jeroboam Son of Nebat

The LORD is serious, his commandments are serious, the consequences of disobedience are serious. What did Jeroboam do that was so bad?

7 Go, say to Jeroboam, ‘This is what the Lord, the God of Israel says: “Because I exalted you from among the people and made you leader over My people Israel, 8 and tore the kingdom away from the house of David and gave it to you—yet you have not been like My servant David, who kept My commandments and followed Me with all his heart, to do only that which was right in My sight; 9 you also have done more evil than all who were before you, and you have gone and made for yourself other gods and cast metal images to provoke Me to anger, and have thrown Me behind your back—

God is God alone, there is no other, and he is pretty adamant that he will not tolerate others getting the credit for his works. Eventually Jeroboam’s son Nadab is made king of Israel and Baasha, son of Ahijah, conspires against him and kills him. Baasha succeeds him as king and his first order of business is he kills everyone in the house of Jeroboam. No one is left alive. This was a fulfillment of the word of the LORD that Ahijah spoke to Jeroboam’s wife.

29 And as soon as he was king, he struck and killed all the household of Jeroboam. He did not leave Jeroboam any persons alive, but kept killing until he had eliminated them, in accordance with the word of the Lord which He spoke by His servant Ahijah the Shilonite, 30 and because of the sins of Jeroboam which he committed, and into which he misled Israel, because of his provocation with which he provoked the Lord God of Israel to anger.

What Kind of Legacy will You Leave?

So, there is the legacy of Jeroboam, Son of Nebat. His family completely eliminated from the world, Israel in sinful worship of golden calves and constant civil war with the house of David. From here on, everyone’s sins are compared to the “sins of Jeroboam Son of Nebat”. The sins he committed and the sins he caused Israel to commit will have lasting and disastrous effects.

15 “For the Lord will strike Israel, just as a reed sways in the water; and He will uproot Israel from this good land which He gave to their fathers, and will scatter them beyond the Euphrates River, because they have made their Asherim, provoking the Lord to anger.

Because of the “sins of Jerobaom Son of Nebat” Israel will be conquered and scatter all over the world. And, if you are a student of the Bible or History, you will find that it happens just as the LORD said. The silver lining I will leave you with is that if the word of the LORD is serious when it comes to punishment, rest assured that his word is just as serious when it comes to reward.

What Legacy will you leave when you depart this earth? Be aware that your actions can and will affect many more people than just yourself. If you think that is not fair, remember there is no one without sin. We all deserve punishment, there are no innocent bystanders. We all deserve the wrath of GOD, but we all have the opportunity to experience his grace, mercy and forgiveness. The choice is ours, and the results of that choice are sure.

I am just a humble sinner. This is simply my study of the bible and my heartfelt opinions. I am no theologian, just a layman’s layman spending time in the word of GOD. You can follow me on Facebook: The Sinner in the Mirror, Instagram: thesinnerinthemirror, and Twitter: @sinnermirror.

May God bless and keep you always.