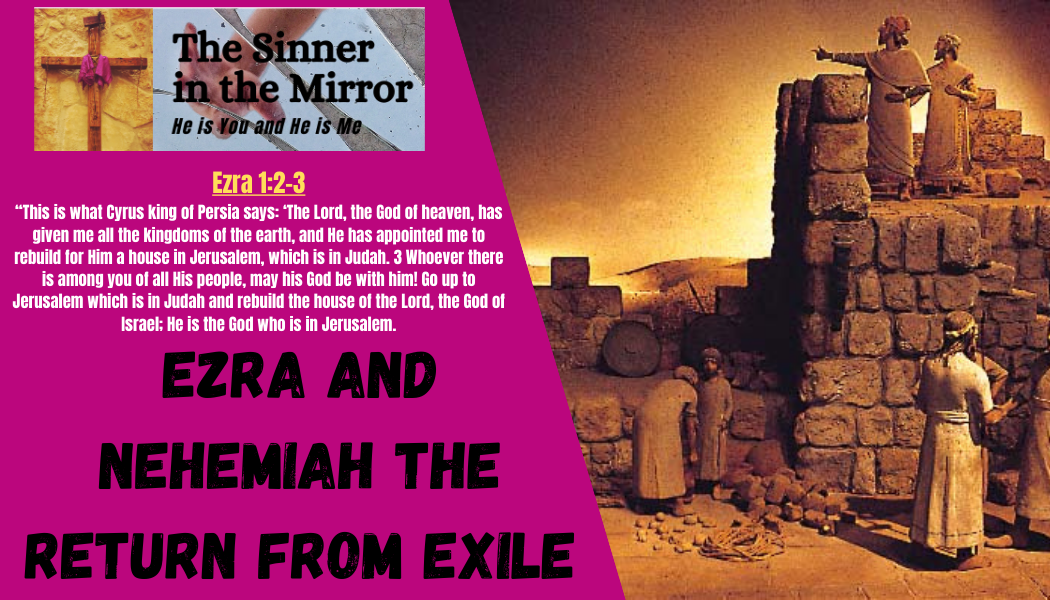 The book of Ezra documents the return from exile as Israel is gone from the promised land. The northern 10 tribes have been scattered among the nations by the Assyrians. Judah and Benjamin have been taken into exile in Babylon. Yet, there is still hope, the word of God is true and sure. His promises to Abraham, Isaac, Jacob and David will all be fulfilled. Even in his prophesying of the coming exile, the prophet Jeremiah tells of the day the nation of Israel would return to the promised land.

I often wonder, what did the Israelites think of the promises of God? They are scattered over the globe, exiled in Babylon, some undoubtedly died while exiled, for them, were the promises fulfilled? Or, is it the promises for future descendants of Israel? I am of the opinion that yes, the promises of God are personal, but also eternal. You and I may not see the fulfillment of all the promises of God this side of the grave, but we will see them fulfilled nonetheless. We are all destined for eternity, one way or another.

The Prophecy of a Persian King

The prophet Isaiah, warning Judah of its upcoming judgment, also prophesies of a Persian King who would return his people and rebuild the temple. Before he is even born, God, through Isaiah calls him by name. God calls his shots. Before Cyrus is born, God has already determined that he will allow for the return of Judah and fund the rebuilding of the LORD’s temple.

28 It is I who says of Cyrus, ‘He is My shepherd, And he will carry out all My desire.’ And he says of Jerusalem, ‘She will be built,’ And of the temple, ‘Your foundation will be laid.’”

And it happens just as the LORD said it would. Over 150 years later, the Persians have conquered Babylon and Cyrus has become king of Persia. Then the LORD stirs the spirit of King Cyrus, and he sends out a letter throughout all the kingdom of Persia.

Zerubbabel Commissioned to Rebuild the Temple

King Cyrus even gives back the vessels taken from the temple of the LORD by Nebuchadnezzar when the Babylonians captured Jerusalem and destroyed the temple. They are given to Zerubbabel (Sheshbazzar) the prince of Judah as he is placed in charge of returning to Jerusalem to build a house for the LORD.

22 Now in the first year of Cyrus king of Persia—in order to fulfill the word of the Lord by the mouth of Jeremiah—the Lord stirred up the spirit of Cyrus king of Persia so that he sent a proclamation throughout his kingdom, and also put it in writing, saying, 23 “This is what Cyrus king of Persia says: ‘The Lord, the God of heaven, has given me all the kingdoms of the earth, and He has appointed me to build Him a house in Jerusalem, which is in Judah. Whoever there is among you of all His people, may the Lord his God be with him; go up then!’”

So, roughly fifty thousand Isrealites load up and head back to Jerusalem. Some, no doubt, either can’t remember the promised land because they were very young when they were taken into exile, or they were born in captivity and have never seen it. They are taking a trip of faith. One, that they have only heard about from the stories told by their elders and passed down from generation to generation. And, on this faith, they go. A trip with dangers, opposition and uncertainty, but they trust in God so they go.

Despite the opposition of the “people of the land” and two new Persian Kings, the Temple is rebuilt, and King Darius of Persia pays the cost of the rebuilding.

14 And the elders of the Jews were successful in building through the prophecy of Haggai the prophet and Zechariah the son of Iddo. And they finished building following the command of the God of Israel and the decree of Cyrus, Darius, and Artaxerxes king of Persia. 15 Now this temple was completed on the third day of the month Adar; it was the sixth year of the reign of King Darius.

With the Temple rebuilt, there is a need for priests, levites, singers and gate keepers to attend to the temple service. The priest Ezra, a descendant of Aaron and a scribe skilled in the law of Moses, is chosen to lead the next group of Israelites back to Jerusalem to reform and restore the temple worship. King Artaxerxes of Persia decrees and provides for their travels. Whatever Ezra asked for, the king of Persia granted “For the hand of the LORD his God was upon him”. The fear of God is even on king Artaxerxes:

Ezra leads this group of 1753 Israelites on a 900-mile Journey across a hostile landscape of robbers, thieves and various other adversaries, without asking for troops to protect them. He could have asked king Artaxerxes, but he did not because he trusted God, and he had told the king that God would protect them.

22 For I was ashamed to request from the king troops and horsemen to protect us from the enemy on the way, because we had said to the king, “The hand of our God is favorably disposed to all who seek Him, but His power and His anger are against all those who abandon Him.” 23 So we fasted and sought our God concerning this matter, and He listened to our pleading.

The faith of Ezra was well-placed. God, being true to his word, delivers them from their enemies and ambushes to arrive in Jerusalem safe and sound. And, they begin to put the LORD’s house in order. Ezra’s next task was perhaps much more difficult. Some previous returnees had not separated themselves from the other people of the land. In fact, some had even taken wives from these people. A practice that they were specifically warned not to do.

One of the very things that lead to their exile in the first place, they are doing again. Ezra confronts the people and they make a covenant with God to send away their foreign wive s and children.

10 Then Ezra the priest stood up and said to them, “You have been unfaithful and have married foreign wives, adding to the guilt of Israel. 11 Now therefore, make confession to the Lord God of your fathers and do His will; and separate yourselves from the peoples of the land and from the foreign wives.”

This had to be a difficult task, and seems harsh. I mean your wife and children are to be sent away. Tough measures for breaking the commandment of God. Yet, they were warned. They had just experienced 70 years of captivity, in part, because of this same dis obedient behavior. Will they, or we, ever learn that obedience brings blessing and disobedience brings curse?

Nehemiah and the Rebuilding of Jerusalem

While the Temple is now restored and the priesthood and people have recommitted themselves to the LORD, the walls around Jerusalem still lie in ruins. Broken down many years before when the Babylonians captured the city, they have never been rebuilt. This, of course leaves the city and its Israelite inhabitants at risk from the other peoples. Nehemiah, cup bearer to king Artaxerxes, has been following the news of the resettlement of Jerusalem and fears for his fellow Israelites safety upon hearing of the dilapidated state of the walls of the city.

His first reaction, prayer. He prays a prayer of confession. Confessing the sins of Israel and of himself and his family. Acknowledging that their exile was their own fault. But then, he continues with the covenant and the fact that God will restore his people if the return to him and keep his commandments. Then, and only then, does he ask God to give him favor with the king to grant his petition to go and rebuild the walls of Jerusalem.

In faith, he then makes his petition with the king. His God was with hem and the king allows him to go to Jerusalem. He spends his first three days surveying the condition of the walls and then he tells the noble, and priests what he is there for and what they are to do. Of course, the other peoples are not happy with the idea and set about to stop the rebuilding process.

In response, Nehemiah establishes a work plan that includes everyone working to rebuild the walls near their own house, so they have some “extra” incentive to get it done and done right. And, armed guards are to be present at all times and everyone working is to carry his sword at his side, just in case their enemies decide to attach while they are busy with the reconstruction.

The walls of Jerusalem were completed in 52 days, record time and a tremendous accomplishment given the tools and technology of the time, and the fierce opposition they faced. Nehemiah faces one more difficulty. The people again have grown lax in following the commandments of God. They are working on the sabbath and some had married foreign woman again. Breaking the very commandments that, in no small part, led to their exile in the first place. He deals with the situation in a rather blunt and serious manner.

25 So I quarreled with them and cursed them, and struck some of them and pulled out their hair, and made them swear by God, “You shall not give your daughters to their sons, nor take any of their daughters for your sons or for yourselves.

So, we now have the Jews back in Jerusalem from their 70 years of exile, they don’t have their own country because the land still is under the authority of king Artaxerxes of Persia, but they have returned to the promised land. This brings us to the end of the Old Testament, the rest of the books to follow all occur with in the timeline we have already covered and serve as amplification. From here there is the 400 years of silence before the New Testament begins.

The Promises of God are Sure

God is not mortal that he should lie. I read that somewhere. He keeps his promises. The problem is we don’t keep ours. The cycle of God’s protection, provision and rest are always followed by the disobedience of his people which brings the curse and wrath of God. All of his promises are sure. Both for blessing and for curses, Will we ever learn this simple fact? More importantly, will we ever take it to heart and obey?

I hope this humble walk through God’s word can bring glory to our LORD and savior. I pray that he will bless and keep you always and may he open your heart and mind to his word and his path for your life’s journey. If you have any comments, questions, ideas or suggestions, please leave them in the comment section below and I will get back to you soon. You can follow me on Facebook: The Sinner in the Mirror, Instagram: thesinnerinthemirror, and twitter: @SinnerMirror